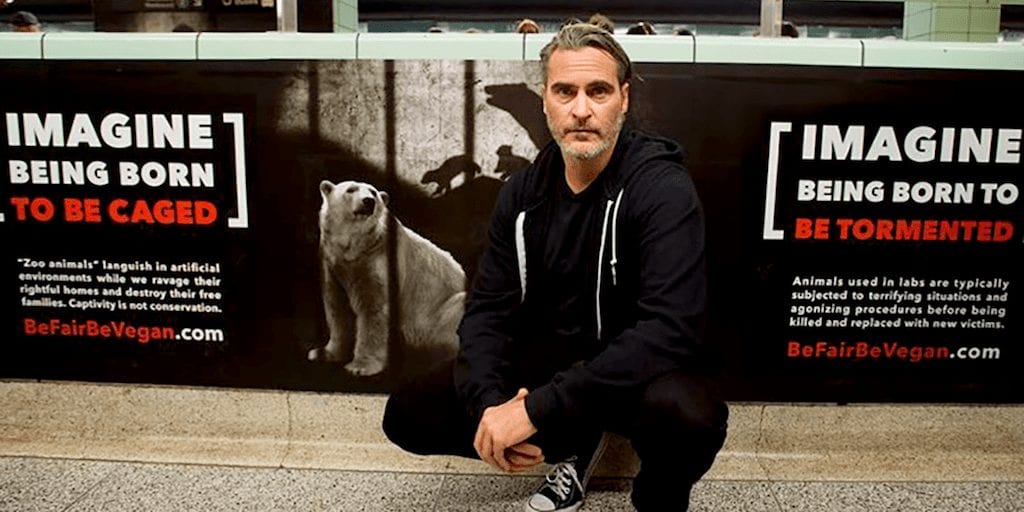 Vegan actor Joaquin Phoenix had a jam packed schedule as he geared up for the Toronto Film Festival. He was up for the Tribute Actor Award in the evening, which he won, but the lifelong vegan still managed to take two hours out to drive an animal rights campaign in the city.

The ‘Joker’ actor dropped by St George Subway Transit Station on his way to the awards to support the BeFairBeVegan ad campaign and pose in front of the group’s billboards.

BeFairBeVegan was hosting an event inside the subway, which is covered in striking pro-vegan messages such as ‘Imagine being born to be caged’.

After the event, Anita Krajnc, member of vegan activist group Toronto Pig Save, said: “He’s so busy, the only window he had was 3 to 5 p.m. today and he has this big award, yet he took time out to come see BeFairBeVegan Toronto because it’s so close to his heart.”

“He’s going to change the world for us and we’re so happy to have him here.”

Pheonix said he would love to see these kinds of adverts featured across the country, and said ‘it’s beautiful what you [BeFairBeVegan] are doing’.

Joaquin Phoenix has been vegan since he was three years old, and is a vocal animal rights activist.

Earlier this year he spearheaded a global march in which activists carried the dead bodies of animals which were taken from factory farms.

Phoenix was pictured carrying an animal through Los Angeles in an eye-catching demonstration.

Chickens, lambs, pigs and many other animals were carried through the streets of London, Paris, Mumbai and other iconic cities across the world.