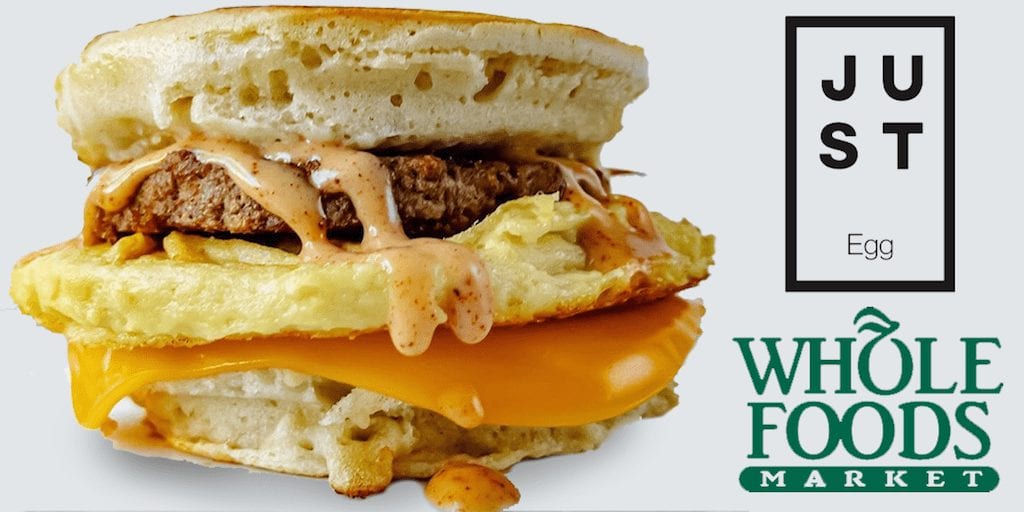 Whole Foods Market has plans to introduce JUST’s popular mung bean-based vegan egg formula in the form of scrambled “eggs” and breakfast sandwiches at its stores in the Southern Pacific region.

JUST has set major expansion goals for 2020. After acquiring Del Dee’s property in Minnesota to scale production of its vegan egg formula, the food start-up has collaborated with Whole Foods Market (WFM) to launch the scrambled vegan JUST Egg on the hot bar of 63 stores in Arizona, Hawaii, Southern California, and Las Vegas from January 1.

While the sandwich bread will be an English muffin or vegan brioche bread sourced from the Los Angeles bakery Rockenwagnor; two sandwiches will include JUST Egg, plant-based meats including Lightlife bacon and Gardein sausages, and vegan cheddar from Good Planet.

The third variation will feature a Spicy Soyrizo with chipotle aioli and Good Planet cheddar.

Whole Foods is also working on including the vegan egg formula in a vegan breakfast pizza recipe to be sold at pizza stations at some stores.

“We are always looking for great partners to help us expand our vegan options,” said Megan Tucker the Associate Coordinator at WFM Southern Pacific Region.

“JUST Egg is a fantastic product we know our customers are going to be excited about.”

The JUST egg scramble, sandwiches and soon to be announced pizza join other plant-based breakfast items that WFM sells at some stores.

Will you try the vegan breakfast options at WFM? Share your thoughts in the comments below!