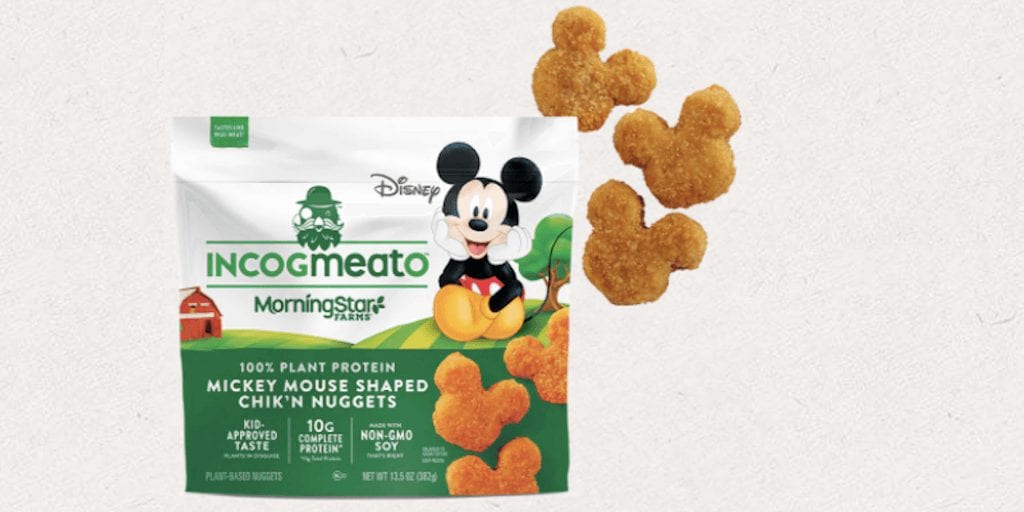 ‘By creating foods that kids love and with the nutrition parents can feel good about, families can experience the magic of Disney during meal time’

Morningstar Farms’-—a subsidiary of the Kellogg Company has launched Disney-themed vegan chicken nuggets as part of its Incogmeato line, this week.

The vegan nuggets made in partnership with Disney are set to roll out in major retailers across the U.S. from this month. They have already been stocked at Walmart, the world’s largest retailer.

The Mickey Mouse-shaped vegan nuggets are meant to be a kid-friendly vegan alternative in order to offer more tasty looking plant-based options to the target group.

The nuggets have a non-GMO soy base and contain 10g of complete protein per-portion. The recipe also makes the plant-based version contain 57-percent less fat and 35-percent less sodium than its animal counterpart along with 10 percent of the recommended daily amount for iron.

“We saw a craving for more family friendly plant-based options and as a mom myself I knew we had a big opportunity with Incogmeato,” said Sara Young, General Manager, Plant-Based Proteins at Kellogg Company

“We are so delighted to be working with Disney to help land plant-based proteins on the plates of kids nationwide.”

While there is no confirmation on whether the Mickey Mouse shaped nuggets will feature in the iconic theme parks, John T. King, Vice President of Consumables Licensing at Disney expressed his excitement on the new collaboration.

“Disney is committed to offering more plant-based foods, we are excited to be working with Incogmeato on the first-ever plant-based Mickey Mouse shaped nuggets,” King said.

“By creating foods that kids love and with the nutrition parents can feel good about, families can experience the magic of Disney during meal time.”

The new vegan nuggets will be available in the frozen section for a suggested retail price of $6.99 per 13.5-ounce bag.

Share this story to let others know about the new Disney-themed vegan chicken nuggets by Morningstar Farms.