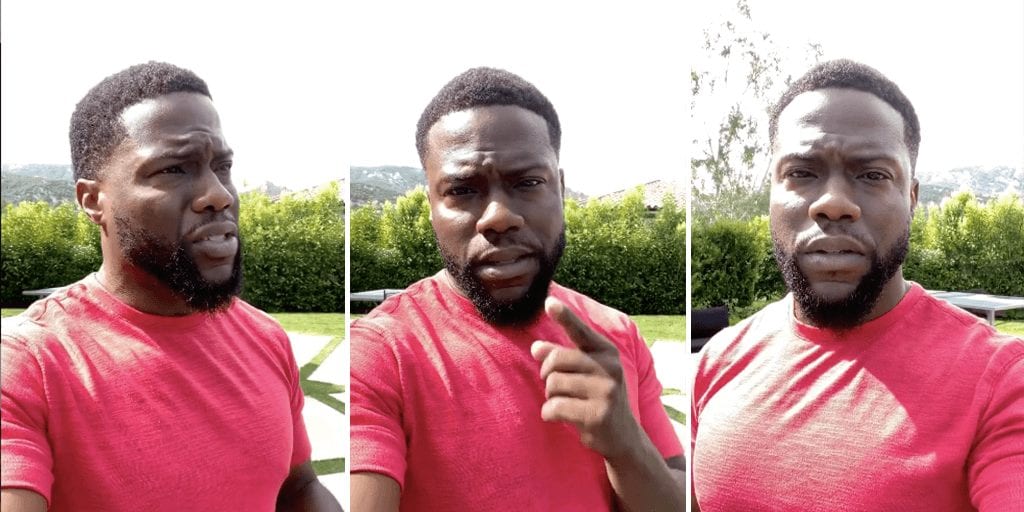 ‘You (the media) should be on the side of the solution, not the problem.’

On Sunday Kevin Hart posted a video message telling the media that they need to project the protests in the right perspective rather than focusing on the looting and rioting angle.

Voicing his outrage at the senseless death of George Floyd, who died on 25 May after being suffocated by Minneapolis police officer Derek Chauvin kneeling on his neck for nearly nine minutes, he asked the media to be ‘a part of the solution’.

“You guys control the narrative,” he said, visibly disappointed.

“So I feel like you guys have a job to do about pushing the correct narrative. Right now, I’m watching that narrative slowly change into the rioting, into the looting.”

“The media, you should be pushing that there needs to be a change as well,” he continued.

Be apart of the solution….not the problem. Push the correct narrative. There is a reason that all of this is happening….Don’t ignore or slide away from the reason!!!!!! Enough is Enough

Focus on the message

As protests continue unfolding in response to George Floyd’s death across all 50 US states, Hart explained the media was digressing from the message of the protests: “We’re not talking about the reason, we’re not talking about why we’re witnessing what we’re witnessing. There’s a reason. I don’t want to lose sight of that reason. That reason is because another man died in the hands of a police officer.

In a tweet, the actor also pointed to another blatant violation of human rights, where a black CNN reporter was arrested whereas a white reporter was allowed to cover the protests.

They can arrest the reporter but not the man that actually committed the murder….Shit is stupid. Enough is Enough. How is he still sitting in the comfort of his own home????? HOW IS THIS EVEN FUCKING POSSIBLE???? His ass should be In JAIL NOOOOOOW. This is fucking ridiculous https://t.co/E0SUkMBYcX

Upon hearing the news of the arrest of the guilty Minneapolis Police Officer Derek Chauvin, the 40-year-old comedian blasted the law saying Chauvin should be charged with first-degree murder instead of third-degree murder, and that the other three police officers present during Floyd’s death should be charged as well.

I’m watching so many decisions be made to stop the looting & rioting. National guard has been called in…curfews are being moved around. How about arresting the other officers that were involved in the death of George Floyd. ??‍♂️??‍♂️??‍♂️ How about Justice???

“That’s making people feel like something is going to change. … Everybody’s conversation should be about the change. You can’t just keep saying equality. We have to take actionable steps and go in that direction.”

“I strongly believe that these developments are in the interest of justice for Mr. Floyd, his family, our community and our state,” said Minnesota Attorney General Keith Ellison while announcing the charges.

Share this story to support the Black Lives Matter movement.