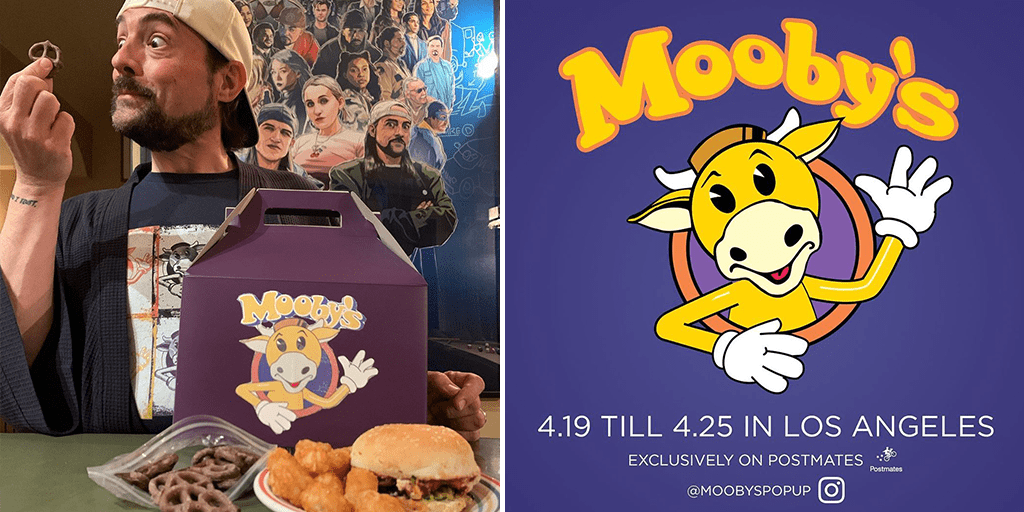 Kevin Smith is bringing Mooby’s- his fictitious fast-food restaurant seen in films, including Dogma, Clerks 2, and Jay and Silent Bob to life as a delivery-only pop-up.

This limited run pop-up restaurant will operate from April 19– April 25 in Los Angeles taking orders for pick up or delivery-only through Postmates.

Smith has teamed up with Derek Berry responsible for Saved By the Max and Good Burger pop-up restaurants in Los Angeles to create the Mooby’s pop-up format.

Announcing the pop-up restaurant on Instagram, Smith said: “Ever since I first introduced the fictional fast food joint in my films, folks have said “You suck at movies, so open a Mooby’s!”

As an added incentive, the vegan director wrote: “And for your “toy surprise”, we include an autographed Reboot card from me, that will also entitle the bearer to front row slots when the pop-up is finally open to the public.”

Smith added that the monetary proceeds from the pop-up will go to No Us Without You- a charity that provides food for families of undocumented restaurant workers during the COVID-19 pandemic.

“You’ve seen fake people eat at a fake fast food joint! Now, BE a fake person eating actual food from a real restaurant,” he continued in the post.

Speaking about the possibility of a built-out pop-up in the future, a rep for Saved by the Max told Time Out “Our teams are aiming to open by summer, but we are continuing to monitor and abide by all safety precautions and requirements before deciding any opening date or run times.”

Mooby’s meals can be ordered through Postmates from  April 19 to 25 starting noon to 8pm or until stock lasts.

Share this news to let people know of the new Mooby’s pop-up restaurant.