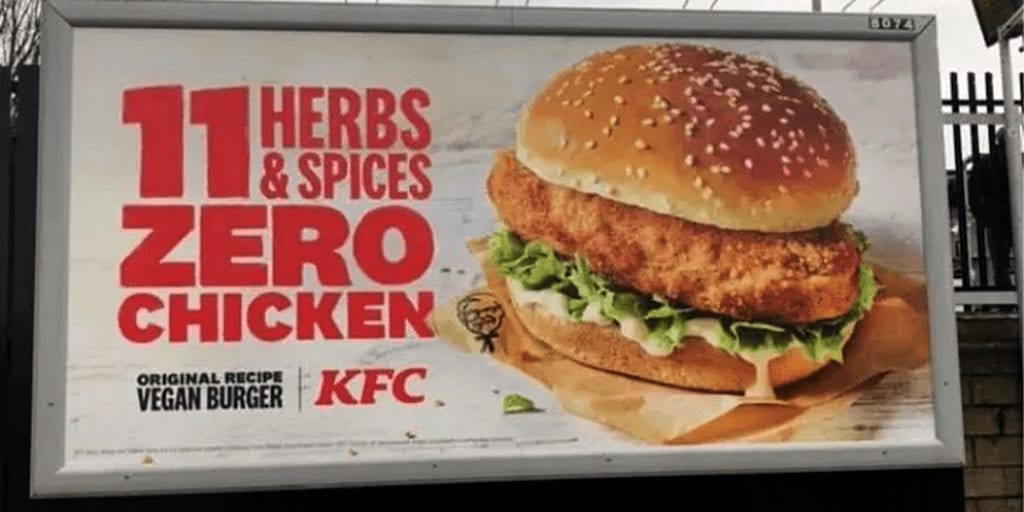 KFC has announced the launch of its new chicken burger for the new year with a tweet and billboard ad.

After several limited time trials in different outlets, KFC is set to roll out an original recipe vegan burger in its UK restaurants on January 2.

Vegan Food UK posted a picture of the chain’s poster in Lewisham, London on Instagram with a caption: “The Zero Chicken Burger to launch in January at KFC!!!”

“We also hear they are setting up vegan specific areas in their prep areas to save any mix up – let’s hope so!” the publication added.

KFC also confirmed the news by tweeting a picture of a burger silhouette followed by a question, “New burger who dis?

Although many KFC fans are thrilled with the announcement, the community remains divided regarding the chain’s animal welfare standards.

“Doesn’t change the fact how they treat chickens. Just because this has no meat in it, still doesn’t make it morally right to eat there,” wrote an Instagram user.

“I’m so torn over this. So glad to see big chains normalising veganism and providing options. But I really so hate KFC and their treatment of chickens,” commented another.

Animal rights organisations including PETA, World Animal Protection and Greenpeace have repeatedly called out KFC and other fast food chains to improve their animal welfare policies.

Earlier this year, KFC became the first UK fast food chain to commit to new European welfare standards to address growing concerns about the exploitation of farmed chickens in the intensive and large-scale production of meat.

Paula MacKenzie, general manager of KFC UK & Ireland, said: “Our customers care about improving the lives of the chicken we buy. That’s why we’re adding our voice to the campaign and encouraging others to do the same – because to inspire real change and provoke meaningful action, we need the industry to move with us,” reported the Guardian.

The new year promises to be highly fruitful for new vegan trends as new plant-based products continue to flood the market.

After Greggs’ popular vegan sausage roll, the bakery chain is rumoured to launch a vegan glazed ring donut and a vegan steak bake as part of its new vegan menu for January.

McDonald’s also has announced the launch of its vegan dippers certified by the Vegan Society in UK and Ireland restaurants from January 2.

Will you try KFC’s new vegan chicken burger? Share your thoughts in the comments below!