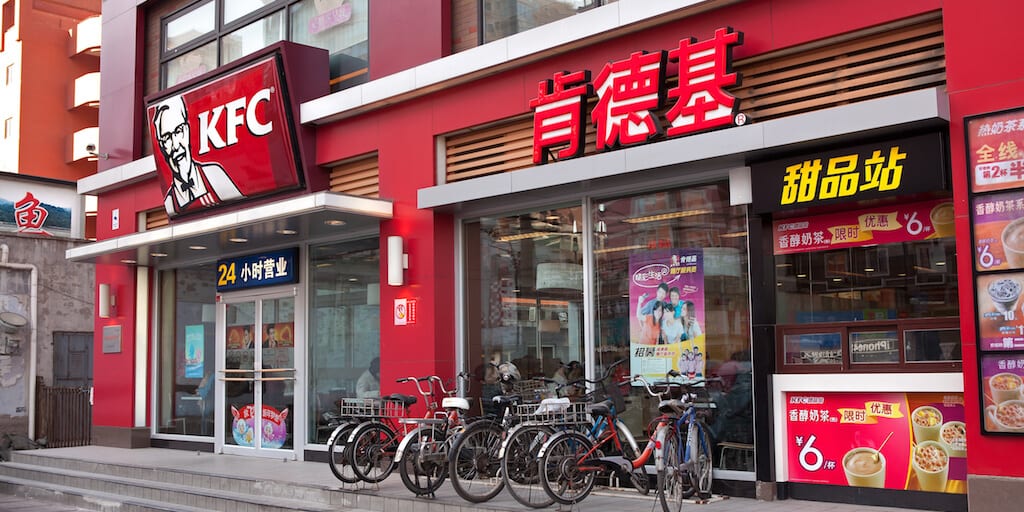 ‘We believe the plant-based chicken concept will take this increasingly popular meatless trend to a new level.’

KFC China’s trial of its plant-based chicken nuggets at selected locations was so hugely successful that the pre-sale coupons for the first day sold out within one hour of its launch in Shanghai and a total of 7,000 coupons were purchased in the shopping window from April 28 to April 30.

According to Yum China (which owns KFC along with Pizza Hut and Taco Bell in China), customers had to buy presale coupons for the vegan nuggets online via KFC’s mobile app before they could get a hand on the plant-based treats.

The quick service restaurant giant partnered with agribusiness Cargill to make the plant-based chicken nuggets, which include wheat, soy, and pea protein along with a small amount of locally sourced water chestnut to make the nuggets more succulent.

“We are committed to embracing innovation and continue to delight and surprise our customers with tasty products,” said Joey Wat, CEO of Yum China.

“The test of KFC’s Plant-Based Chicken Nuggets caters to the growing market in China for delicious alternative meat options on the go. We believe that testing the plant-based chicken concept with one of our most iconic products will take this increasingly popular meatless trend to a new level.”

Seeing the enthusiastic response, Cargill also announced its plans of expanding its range of meat substitute products, including burger patties and ground meat under its brand Plant Ever as “part of Cargill’s inclusive approach to the future of protein.”

Industry experts attribute the changing food landscape to several factors including steep rises in pork prices partly due to the sweeping African swine fever outbreak and the ongoing U.S.– China trade war as well as the novel coronavirus, which experts believe to have sparked from a wet market in Wuhan, China.

Cargill isn’t the only business looking to cater to China’s new found interest in plant-based foods, Nestlé is set to open its first plant-based plant worth $103.58 million in  China with plans to launch plant-based meat products later this year.

“In recent years, the food sector has undergone a quiet revolution as people are choosing more and more healthy, nutritious, and environmentally friendly foods,” Nestlé said in a statement.

Share this news to support the growing trend of the plant-based market globally.