KFC vegan burger sells out within four days of launch 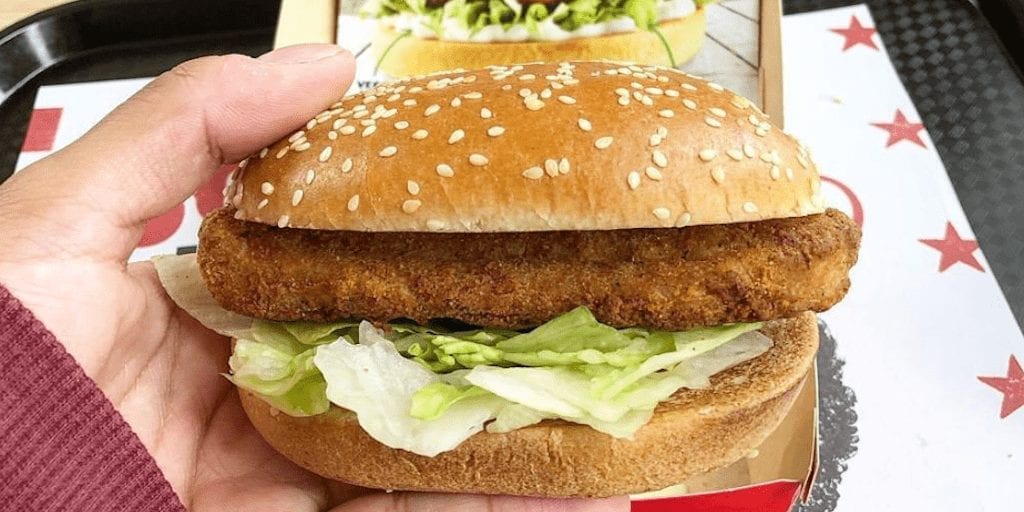 One vegan Imposter Burger sold every minute at a store in London. Image: @Jordannofx on Instagram

KFC’s trial of the vegan Imposter Burger has been a raging success, with the plant-based chicken burger selling out within four days of its launch.

The fast food giant found sales of the new vegan chicken burger to be 500 percent higher than a normal burger.

In KFC’s store on Gloucester Road in London, one vegan burger was sold every minute on Wednesday and it quickly sold out.

Victoria Robertson, senior innovation leader at KFC, said in a statement: “We knew there were plenty of people who would want to get a taste of the Imposter, but we didn’t anticipate this phenomenal response!

“We can’t wait to get the Imposter back out in restaurants so vegans can get their finger lickin’ fix.”

Anyone wanting to get their vegan KFC fix has to wait until Tuesday 2 July at selected stores.

But the initial trial will only last until 14 July before KFC decides whether it wants to roll out the burger nationwide.

The success of the trial, along with successes for Burger King’s Imposter Whopper and Subway’s plant-based sub, suggest it’s likely the Imposter Burger will become a permanent on KFC’s menu.

The burger features a Quorn chicken fillet, which is coated in KFC’s trademark herbs and spices and combined with vegan mayo and lettuce in a bun.

It hit stores in London, Bristol and the Midlands last week (June 17) for a one month trial.

“Vegans have been cruelly denied the incredible taste of KFC up to now, which is why we’ve worked hard to perfect The Imposter – a vegan burger that the Colonel would be proud of,” said Robertson as he burger launched.

Have you tried the KFC Imposter Burger? Tell us what you think in the comments below