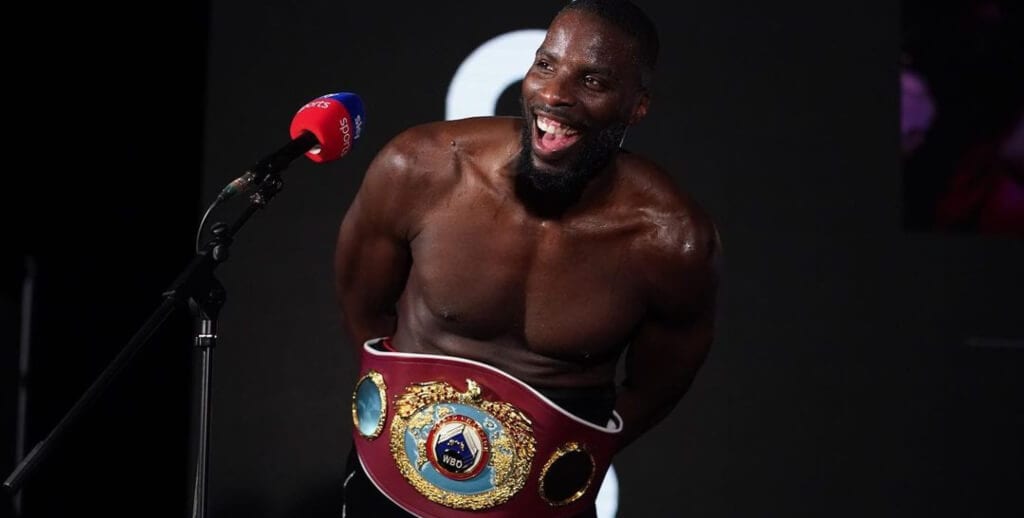 “Vegan athletes like Lawrence Okolie, show the world you don’t need to eat meat to be competitive at a world-class level.”

The six-round knockout win described as a ‘highlight of his career’, also makes Okolie the first vegan to win the cruiserweight title.

Okolie’s latest win adds to the boxer’s British, Commonwealth, and European titles. However, the 28-year-old, who has never eaten meat as a professional athlete, and has an unbeaten match record of 16-0 says ‘he has only just begun’.

“They told me my energy levels would increase, so I tried it for one month. After that first month, I never looked back,” the boxer said.

“I’ve never eaten meat as a professional athlete, but I’ve done it both ways as an athlete and I prefer the plant-based approach.

“I would recommend this lifestyle to fighters who want to find increased energy levels and an easier time maintaining weight.”

Okolie is reportedly not the first vegan to win a belt, as it is former WBC Middleweight World Champion Keith Holmes, who holds that distinction. However, the athlete is the first in the cruiserweight group and the only current vegan champion.

The athlete who has faced belittling, bullying, and ridicule for weight issues during his teenage years hopes he can be an inspiration to people, help bust myths associated with eating vegan, and show to others that “if you have belief and dedication, anything is possible”.

Speaking to BBC Radio 5 Live, Okolie said:  “It’s important that I become one of Britain’s best cruiserweights and I have the opportunity to do that. This was a good win but there are more tests ahead.”

He added: “Doing all these interviews, realising how much this means – not just to me but to so many people that I can inspire – it feels amazing to go in and actually get it done.

“I’m coming into my own, starting to believe in boxing. I used to just believe in my physical strength, the fact I can hit someone hard and stop them.

According to World Boxing News, Kory Zelickson, the CEO of Veji – an online vegan marketplace that connects consumers to plant-based offerings-  is backing  Okolie’s plant-based approach

“Vejii is committed to supporting vegan athletes like Lawrence Okolie, who show the world you don’t need to eat meat to be competitive at a world-class level,” Zelickson said.

“We hope the younger generation that looks up to these athletes sees their example and takes steps to try and incorporate more plant-based foods into their own diets. Vejii is here to help with that.”