Leading vegan blogger ‘Minimalist Baker’ will now use meat and eggs, and people are furious 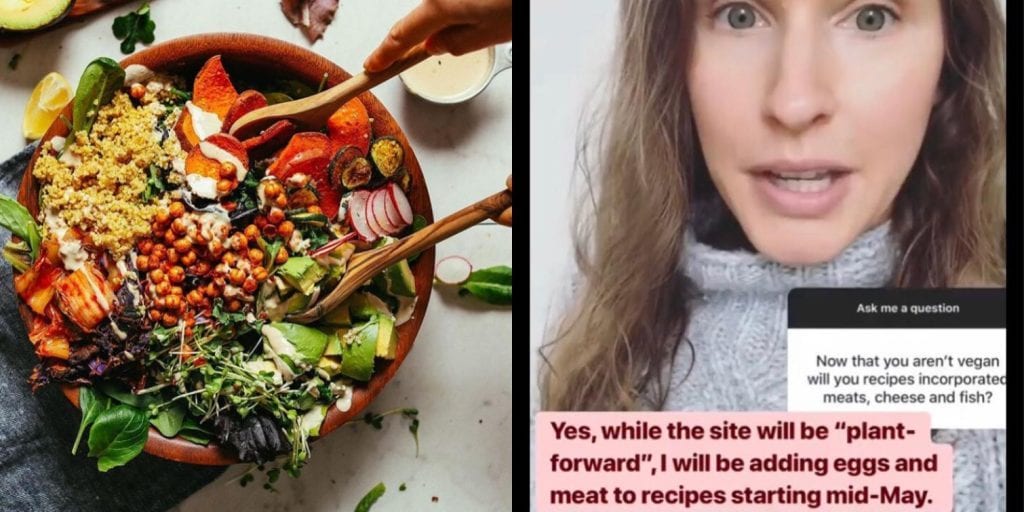 Food blogger Minimalist Baker has been a favourite for vegan chefs for years, covering hundreds of easily accessible plant-based recipes.

The blog has amassed millions of followers with quick and simple vegan recipes which can be prepared in less than 30 minutes, but fans have been left stunned after the chef behind the brand, Dana Shultz, announced she will now introduce eggs and meat into recipes.

Shultz answered fans’ questions on her Instagram stories yesterday, and revealed she had started incorporating animal products to her diet in an attempt to alleviate digestive problems and hair loss.

She said she was unable to get enough protein in her diet, as her body would not tolerate high protein plants such as chickpeas and tofu.

But perhaps what has left vegans most disappointed is her decision to introduce animal products to her blog.

She said she would add egg and meat to the recipes, with many being left feeling ‘betrayed’ after following the blog for years.

New non-vegan recipes will be filtered from plant-based ideas on the website, and Shultz said the brand will still be ‘plant-forward’.

But some vegans have been left furious with her decision and will no longer follow Minimalist Baker. Many vegans posted about their disappointment on Twitter.

However, some people focused on their sympathy for Shultz’s health concerns.

And others said they would still use Minimalist Baker’s vegan recipes.

Anticipating the backlash, Shultz told Vegan Food & Living: “Perhaps I’ll face more negative feedback when I post nonvegan recipes (in May). If our recipes are no longer a good fit for you, I totally understand.

“I sincerely thank you for your support up to this point. And I trust that we’re all honouring our own bodies and truths and will find the communities we need to best support us.”

The drama follows a long line of high-profile vegan influencers abandoning the diet recently, including prominent YouTuber Rawvana who was caught on camera eating fish while on holiday in Bali.

What do you think of Minimalist Baker’s decision to introduce non-vegan products? Tell us in the comments section below!