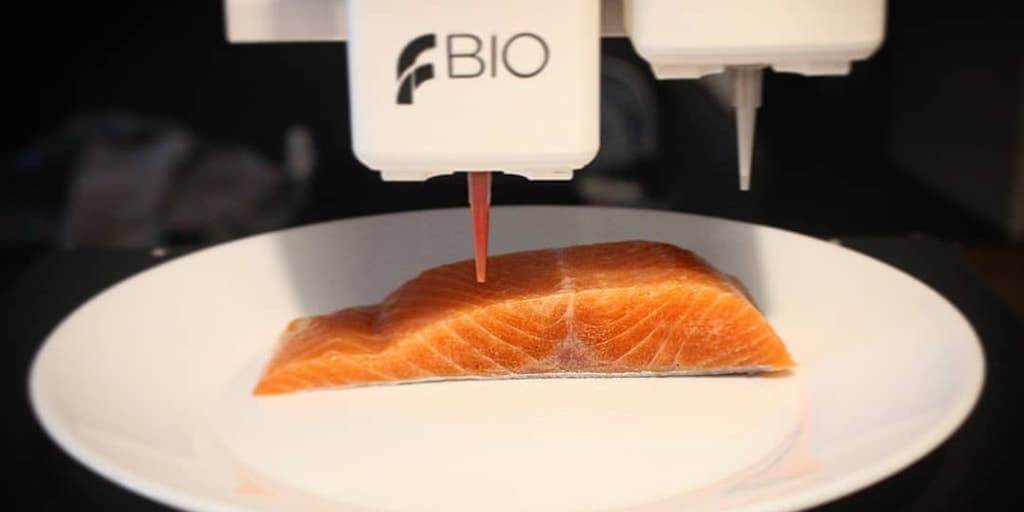 Students in Denmark have developed 3D printing processes to commercialise vegan alternatives to salmon and tuna.

A group of international students recently developed a 3D technique for printing salmon.

The three students from Sweden, Spain, and Denmark teamed up to form Legendary Vish– a project that aims “to offer everyone who loves the taste of fresh seafood a delicious plant-based alternative.”

The group intends to apply the 3D printing technology to other plant-based fish products such as tuna or herring alternatives in the coming future.

Students Robin Simsa, Theresa Rothenbücher, and Hakan Gürbüz, who come from the University of Gothenburg, the Universidad Autónoma de Madrid, and the Technical University of Denmark (DTU) ​ met in 2017 during the EU-led research project Training4CRM as Marie Curie Early Stage Researchers (ESR).

As part of their PhD projects, the group worked to develop 3D printing processes for medical technologies before realizing that the technology could be adapted to print plant proteins and binders in structured forms to bridge the gap seen in the plant-based seafood sector.

“We saw that in the plant-based seafood market, there are currently mainly unstructured products, such as fish sticks or burgers. However, products with a more complex structure such as salmon fillets cannot be found on the market right now,”  Robin Simsa, CEO of the Legendary Vish project told FoodNavigator.

“We saw a unique opportunity in utilising 3D food printing to create seafood products with a complex structure, which cannot be achieved with classical extrusion technologies.”

The group has used a blend of mushroom, pea proteins and starch or agar-agar gelling agents along with avocado or nut oils with omega-3 fatty acids to develop the  vegan salmon product.

While the 3D technology helps to achieve the fish-like texture and appearance, the students have worked with flavor and aroma experts to recreate the nuanced taste of salmon.

According to Gübüz, vegan fish products are a sustainable alternative to conventional fish, because not only does the production process produce less CO2, the ingredients can be sourced locally. In addition, the vegan products do not consume extra energy, which is needed in the form of fishing vessels and transportation of fish in refrigerated trucks.

The first products are expected to hit the market by 2022 with the team initially  intending to launch in Austria, Germany and Switzerland, before expanding to Scandinavia and other parts of Europe.

“We want to expand first to Scandinavia due to the high amount of seafood consumption and later also to other European countries.​ Our production upscale is planned to be finalised by 2022, and then consumers can get a first taste of our products,” ​shared the team.

The project has already received € 6,000 in funding from the Austrian funding program Greenstar for start-ups with environmentally friendly or sustainable projects and is one of the selected ten innovation projects running for a finalist position.

The winner prize money includes €210,000 in funding and a place in the Greenstar incubation program in Vienna.

The group is also eyeing on becoming a technology supplier for other plant-based companies.

“We are in the competition with our vegetarian fish product. However, depending on the further development and marketing, we can also develop to become a 3D technology supplier for other companies – especially companies with vegetarian products, since we have developed a technology that can provide texture,” said Chief of Technology Hakan Gürbüz.

Share this news to let others know about the new 3D vegan salmon from Legendary Vish.