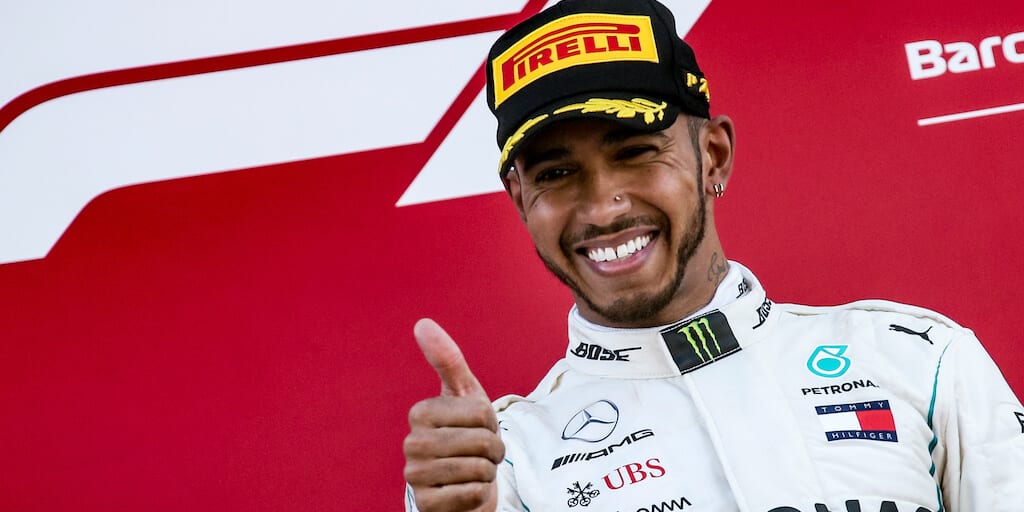 “I could have only ever dreamed of being where I am today.”

Hamilton’s father, stepmother, and vegan dog Roscoe were all present at the venue to celebrate the 35-year old’s historic victory.

His win now brings him even closer to a seventh world title, another record currently under Schumacher’s belt.

An ecstatic Hamilton later told reporters: “It is going to take some time to fully sink in. I cannot find the words at the moment.

“My dad is here, which is amazing, and my step-mum Linda too and my dog Roscoe so it is a blessed day.

“I could have only ever dreamed of being where I am today. didn’t have a magic ball when I came to Mercedes but here I am and as a team we are trying to make the most of it.”

‘Beyond my wildest dreams’

The formula 1 champ also posted a gratuitous note on Instagram stating: “Today is beyond my wildest dreams. I couldn’t be here today without my team, continuously innovating and pushing the barrier in this game.

“I’m so grateful to have you guys by my side through this journey. It doesn’t matter how many Sundays we do this, it’s always a challenge.

“None of this has been easy. It’s been such a privilege to work with you all. I’m thinking of Michael today, I will forever have the utmost admiration and respect for you, it’s truly been an honour to be mentioned in the same sentence as you.

“And to you #TeamLH, I can’t express how grateful I am for all of you. All I can say is thank you, from the bottom of my heart for always believing in me. Still We Rise.”

Hamilton, who has been vegan since 2017, has thrown his weight behind several social issues.

Apart from being a passionate supporter of environmental and animal welfare issues, he has also used his platform to fight racial inequality.

Following the death of African-American George Floyd at the hands of a white police officer in the United States, the outspoken vegan activist urged everyone regardless of their skin tone or nationality, to take action to fight systemic racism.

He even joined a  protest in London to support the BLM movement and did not mince words when calling out others from the F1 community for remaining silent on the prevailing racism issue and lack of diversity within his own sport.

Before the Portuguese Grand Prix, he took to Twitter to call for an end to police brutality in Nigeria.

He tweeted: “We all have a responsibility to educate ourselves and raise awareness of the tragedies happening in the world around us and take action where we can.

“The recent events in Nigeria are a human rights crisis… #EndSARS.”

As the only Black driver in Formula 1, he wore a face mask with the phrase “Black Lives Matter” while celebrating his momentous feat on the podium.