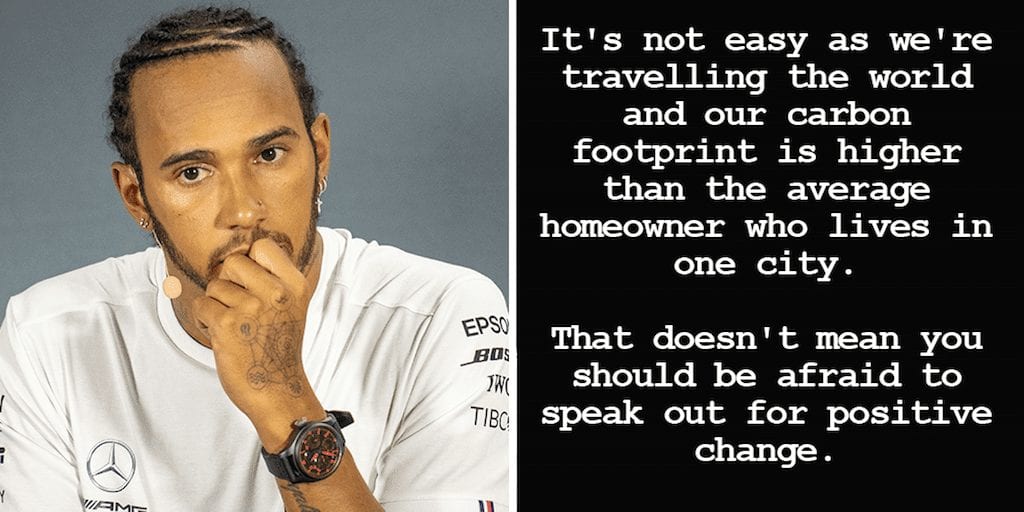 Lewis Hamilton has defended himself against accusations of hypocrisy following his environmental posts on social media.

The F1 champion is vegan and an outspoken animal rights and environmental activist, and often takes to his Instagram page to urge his followers to ditch animal products from their diets.

But while many have applauded the posts, they have been met with a backlash from those who criticise Hamilton’s lifestyle.

Formula 1 is among the most unfriendly sports to the environment, and Hamilton needs to travel around the world by plane to compete in races.

Social media users have repeatedly branded Hamilton a hypocrite, while former F1 rival Fernando Alonso told Spanish radio: “I would never release a message like Lewis. You can’t send out a message one day and the next day do the opposite.

“We all know the lifestyle that Lewis has, and that Formula 1 drivers take 200 planes a year. You can’t then say: ‘Don’t eat meat.'”

But Hamilton has hit back against his critics, arguing that he can still fight for animal rights and the environment.

“It’s not easy as we’re travelling the world and our carbon footprint is higher than the average homeowner who lives in one city,” he said.

“That doesn’t mean you should be afraid to speak out for positive change.”

Last week Hamilton launched into a passionate plea about climate change and the devastating effects of the meat industry on Instagram, and insisted that people need to go vegan if the planet is to survive.

The 34-year-old F1 driver, who turned vegan in 2017, shared his despair about the world in an emotional post to 13.2 million followers, which was later removed.

The posts read: “Hey world, I hope everyone’s enjoying their day. I’m sad right now with the thought of where this world is going.

“Extinction of our race becoming more and more likely as we over use our resources. The world is a messed up place. World leaders either uneducated or don’t care about the environment at all.

“Agriculture farming is the largest pollutant (sic) we currently have by over 50 percent, far more than our travel industry combined. I’m sad to see so many people, even close friends ignore what is happening daily.

“Education is key and we were taught that eating animal products was good for us but we’ve been lied to for 100s of years.

Hamilton admitted it had taken him 32 years to understand the impact he was having on the world, adding he was working on how to play a better part.

Earlier this year, he sold off his private jet, which he often used to travel between his homes in Los Angeles and Heathrow.

Continuing his message, he added: “Being a part of the issue is not meaningful. Being part of the solution is and I’m striving to do better.

“I urge you to do some research, find the compassion I know you have within you to recognise what you are contributing to in terms of what you eat which keeps the meat and dairy industry flourishing and therefore deforestation, animal cruelty, our seas and climate decaying on a daily basis.

“Go vegan, it is the only way to truly save our planet today. It can be done so quickly, all you have to do is put your mind to it,” he implored.

He ended his post with a dispirited message stating: “Honestly I feel like giving up on everything. Shut down completely. Why bother when the world is such a mess and people don’t seem to care. I’m going to take a moment away to gather my thoughts. Thank you to those of you who do give a damn about the world.”

What do you think of Lewis Hamilton’s environmental record? Share your thoughts in the comments section below!