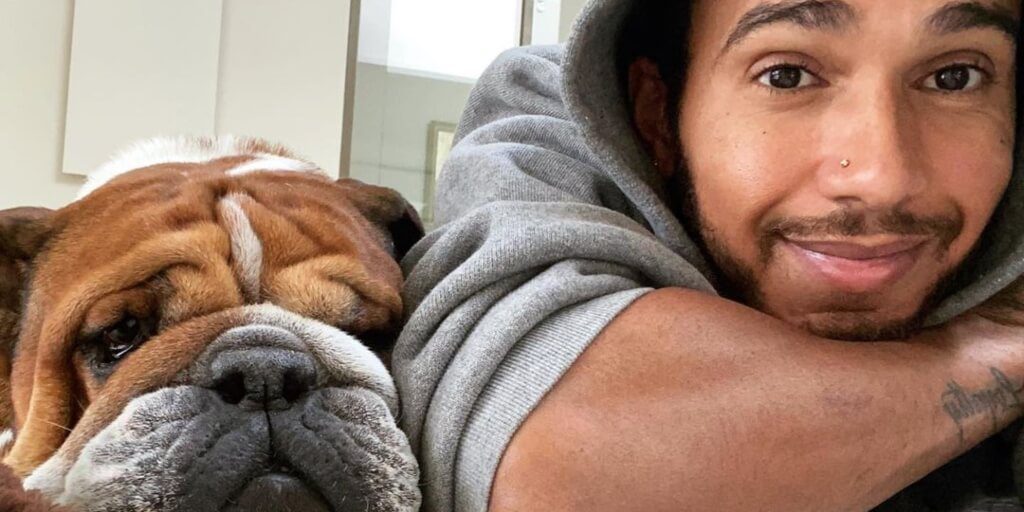 Hamilton’s bulldog Roscoe has been on a vegan diet for the last two years.

Lewis Hamilton has come under fire after flaunting his dog’s vegan diet – while sitting on a gas-guzzling private jet.

According to Hamilton, Roscoe was put on a vegan diet to help cure his multiple ailments, which the breed is known to suffer from due to years and years of inbreeding.

In one of his recent posts, the F1 champion shared a photo of Roscoe propped in front of a plate of fruit including strawberries, pineapple and kiwi via the pooch’s Instagram account.

A bowl full of vegetables including broccoli, peppers and green beans was on the table as well.

The photo was accompanied by a caption that said: “I loves beings a vegans.

“I gets all the vegetables ands fruits I wants.

Although Hamilton regularly uses his platform to advocate veganism and has in the past urged his followers to be a little more aware of their carbon footprint, in view of minimizing it, his latest post has been mocked for its apparent hypocrisy and the motorsport superstar‘s extravagant lifestyle.

“Doesn’t eat meat, flies on a jet,” wrote one user.

Another commented: “Talks about saving the environment whilst flying his dogs around first class/on private jets…. If everyone had a carbon footprint as big as Lewis Hamilton we wouldn’t have an earth left.”

“Funny how Lewis Hamilton is talking about climate change and yet he is flying in private jets – another just talking bs while being a bad role model,” wrote a third.

Others argued that dogs are not suited for vegan diets since they are carnivores.

Television vet Dr Scott Miller, who has appeared on BBC’s Crufts said: “Dogs and cats have sharper teeth for catching meat. As much as it makes sense for you to be a vegan, when it comes to our pets it’s going to prove problematic.’

However, according to vegan charity PETA, which has previously commented on the issue, dogs can be plant-based with ‘the right planning and care’.

Animal nutritionists also suggest that pets can be transitioned to vegan diets under the supervision of trained experts.

Share this story: Lewis Hamilton blasted for flaunting dog’s vegan diet – while on a private jet.