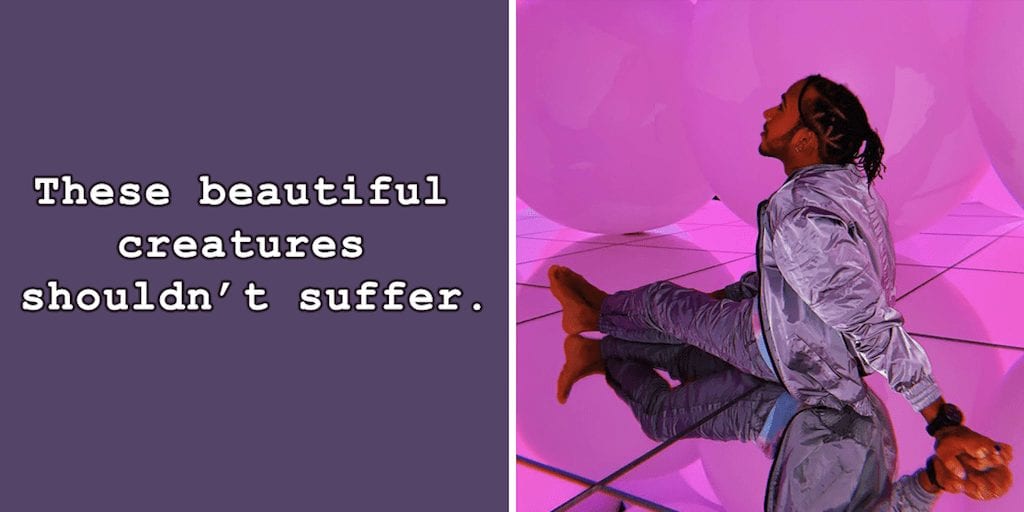 Lewis Hamilton has exposed the brutal reality behind dolphin tourism, pleading with his followers to boycott cruel animal shows.

He shared a video showing dolphins performing at a marine park, which goes on to reveal how they are hunted and kept in ‘horrific’ conditions while in captivity.

“So I’m back in Japan, one of my favorite places in the world. One of the most beautiful, peaceful wonderful places,” he wrote.

“The culture, the people, the food and cities are wow. But do you know, this happens here in Japan. Please please don’t go and support these shows around the world, don’t buy tickets to show your kids.

“Instead, educate them of these horrible things that have happened to the dolphins, whales, and other sea life. These beautiful creatures shouldn’t suffer.”

Last month the F1 driver defended his decision to post disturbing slaughterhouse footage on his Instagram account, arguing he feels a moral obligation to raise awareness of animal abuse.

The F1 champion posted a video of a cow being repeatedly hit in the head with an axe, and warned the video contains ‘graphic footage’.

The post also shows the animal being stabbed as part of barbaric leather industry practices.

While many praised Hamilton for raising awareness for animal cruelty, some Insta users criticised the animal rights activist for posting such graphic content on his page.

But the athlete later defended the post on his Insta story, saying he ‘can’t waste’ his platform.

“Guys, I’m sorry if the last post has ruined your day, but you/we need to see this. When we go and buy leather, this is what we are supporting.

“When we go by [sic] a car, or a sofa, this is what we are supporting. It’s not your fault yet we are keeping the demand up.

“If I don’t post this, who’s going to? Who’s going to care for these animals? I’m sorry but I have this platform and I can’t waste it.”

How important is Lewis Hamilton’s form of activism? Share your thoughts in the comments section below!