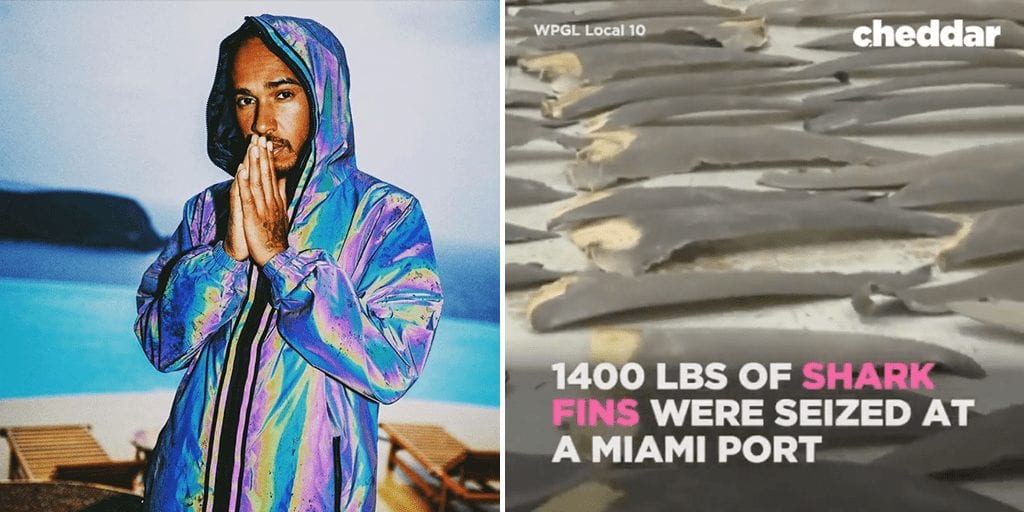 Vegan Race car champion Lewis Hamilton has spoken out against the brutal practice of shark finning calling it “barbaric” and “disgusting”.

The five-time Formula One race car champion condemned the shark fin trade after U.S. wildlife inspectors busted a consignment that contained 1,400 pounds of dried shark fins at a Miami port on Monday, January 24

Posting a video of the seized consignment, Hamilton wrote: “1,400 pounds of shark fins were seized at a Miami port.

“This needs attention people, this is disgusting.

“People are catching sharks, chopping off their fins and throwing them back in the ocean where they sink to the bottom helpless and die.

“This is barbaric and we need to push to change this!!”

According to CNN’s report, the dried fins were worth $1 million and were hidden in 18 boxes. The shipment was believed to be on its way from South America to Asia.

Dried shark fins are a huge hit in the Asian market because of their use in traditional recipes and medicinal potions. Shark fin soup for example is considered a delicacy in China.

According to Wildaid: “Fins from up to 73 million sharks are used in shark fin soup every year.”

In shark finning, smugglers cut off fins from live sharks and dump them back into the ocean, where the decapitated sharks either bleed to death or die because of their inability to move. Some conservationist reports claim that as many as 100 million sharks are killed each year in this trade.

Although U.S banned shark finning in 2000, it does not disallow the trade of shark fins.

However, the consignment contained endangered shark species highlighted by the CITES (Convention in International Trade in Endangered Species) thereby violating the Lacey Act, which bans trafficking in illegal wildlife.

“The recent seizure of more than 1,000 pounds of shark fins in Miami from potentially protected species demonstrates why we need a federal shark fin ban,” Ariana Spawn, an ocean advocate at the nonprofit advocacy group Oceana told CNN.

The non-profit group is pushing the authorities to pass the Shark Fin Sales Elimination Act to stop the trade in the US.

“A state that is now the hub of the fin trade needs to take a stand on the issue. If you don’t stop the trade of the shark fins, it’s hard to stop the decimation of the shark population,” said Stefanie Brendl, the founder and executive director of Shark Allies.

Hamilton’s post drew passionate replies from his followers who were equally moved at the apathy displayed in the name of trade.

“Hate that humans are thinking that they are the cleverest and can do anything to anyone!!!! People must be punished for that!!!” wrote one user.

“I thought that human was the smartest animal on this earth but i was wrong. We destroy our own future….” commented another.

“There must be very harsh sentence on this illegal Trade and poaching. It is so sad what people do to our poor animals,” added a third.

Share this news to expose the brutality of the shark fin trade.