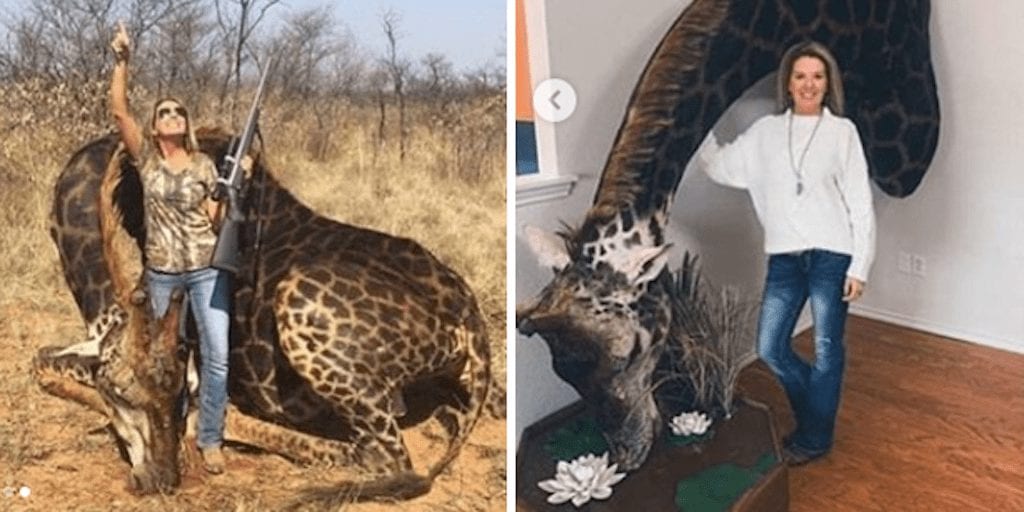 Lewis Hamilton has condemned the trophy hunting industry by sharing a post which exposes a woman who killed and endangered giraffe for sport.

The vegan F1 champ posted an image on his Instagram story which showed a black giraffe which was killed by a trophy hunter in South Africa.

The post condemns the Kentucky hunter for killing a species which is in drastic decline, with estimations populations have dropped 40 percent in 30 years, according to the Humane Society.

The post quotes the hunter as saying: “Prayers for my once in a lifetime dream hunt came true today. Spotted this rare black giraffe bull and stalked him for quite a while. I knew it was the one.”

Hamilton promoted a comment from a page which blasted the hunter for making ‘decorative pillows and a gun case out of the giraffe and she also ate some of its meat’.

“She has shown absolutely no remorse for killing this beautiful creature,” the post said.

“Hunting a giraffe in South Africa is legal if it is pre-arranged with a game park. However, this story raises questions about giraffes being raised for trophies, especially given that there are less than 100,000 on the planet, and their population has dropped by 40% in the last 30 years.”

Hamilton regularly speaks out against animal abuse to his 12 million followers. He shared a post which condemned rhino poaching earlier this week. “We need to be clear that the demand for rhino horn is not only costing the lives of rhino, but also the lives of those who dedicate their lives to protecting them,” it said.

And earlier this year he slammed the slaughter of whales and dolphins in a furious social media post.

The vegan athlete shared a disturbing image from Save the Reef which exposes the yearly killing of sea life in the Faroe Islands.

“This is so upsetting. How can you honestly do this to another being. Disgusted! #[email protected],” he wrote.

What influence do you think Lewis Hamilton’s activism could have on animal rights? Share your thoughts in the comments below!