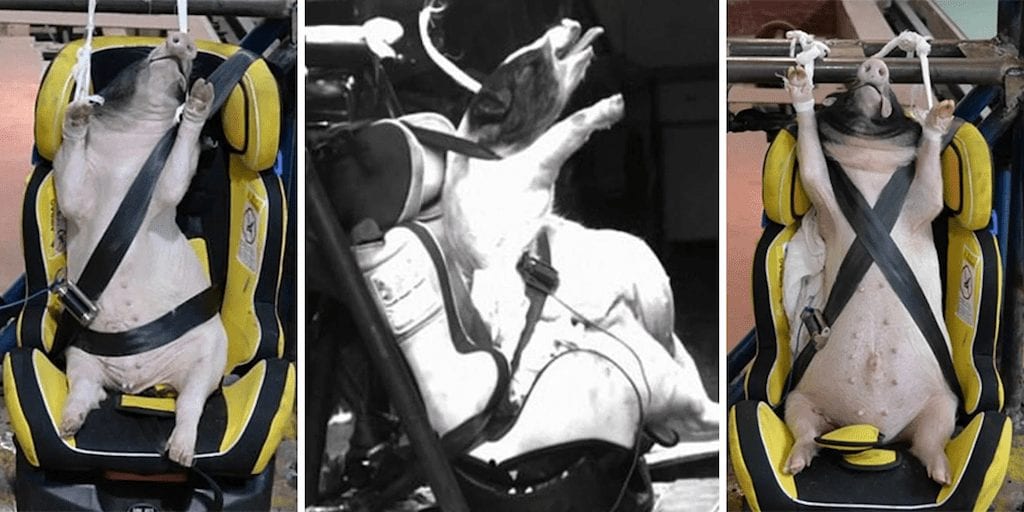 An animal testing lab in China has been exposed for using pigs as car crash test dummies in experiments which have left animals dead or with horrific injuries.

Images have emerged of pigs visibly terrified as they are strapped to sleds and fired into a wall at 30mph.

An investigation has revealed that seven young pigs were killed in the experiments, while another eight were injured.

They were left with bleeding cuts, broken bones and painful internal bruising, and researchers found the animals’ lungs, spleens and livers were damaged by the crashes.

The research was published in the International Journal of Crashworthiness, and aimed to test seat belt modifications to analyse their effectiveness.

The scientists at the testing lab used pigs as they say the animals have a similar anatomical makeup to a human child – helping them see what might happen to humans in a car crash.

The young pigs were also reportedly starved for 24 hours and not given any water for six hours in the buildup to the brutal study.

Animal welfare group People for the Ethical Treatment of Animals (PETA) claimed the animals had electrodes inserted into their abdomens.

The group said animals were left “bloody, bruised, and mangled”.

Instead of the lethal animal tests, activists argue the scientists should use readily available technology such as computer modelling, 3D medical imaging and mannequins.

“Other researchers have also used human cadavers and virtual reality (digital crash dummies) for the same purpose. In the 21st century, every car company on the planet should already have adopted these methods,” PETA added.

“No regulations exist there that would require such horrific experiments to be performed.”

The scientists from the Institute for Traffic Medicine at the Third Military Medical University have argued the tests follow US guidelines for lab animals, and claimed the test had been approved by an ethics committee.

They argued tests could prevent abdominal injuries in humans in the future.

Do you think these kinds of experiments should be banned? Share your thoughts in the comments section below.