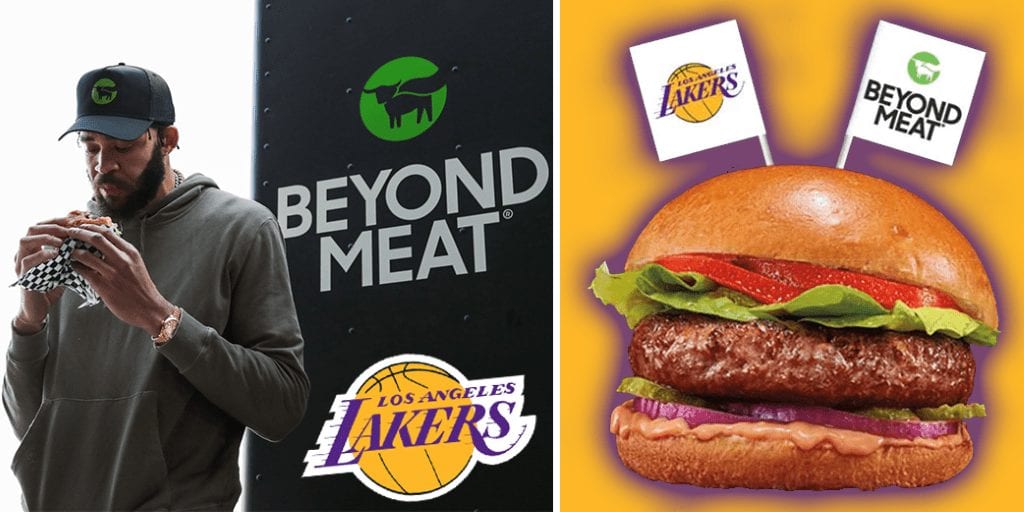 NBA team Los Angeles Lakers has partnered with Beyond Meat to promote veganism amongst sports fans.

In line with its Go Beyond™ campaign announced in February, vegan start- up Beyond Meat collaborated with Los Angeles Lakers to introduce passionate and loyal sports fans to a plant-based lifestyle.

“At Beyond Meat, our goal is to provide consumers with plant-based meats that represent the Future of Protein – delicious, satiating protein and fuel for the body that is unburdened by health concerns increasingly associated with various animal meats,” said Ethan Brown, Founder & CEO of Beyond Meat at the time of launching the Go Beyond campaign.

“It’s not surprising to see that world-class athletes who are dialed into their bodies are early adopters of plant-based meat.”

With the new alliance, Beyond Meat and the NBA team will now work together to create and share inspiring content, drive consumer engagement and offer unique opportunities to introduce fans to the delicious taste and benefits of plant-based meat’.

“We are excited to welcome Beyond Meat as a new sponsor of the Los Angeles Lakers. They are an innovative and forward-thinking company with established and successful relationships with NBA players around the league,” said Lakers President of Business Operations, Tim Harris.

“Anytime we can align with a company that is looking to improve the wellness of our players, as well as our fanbase, we think it’s a very good fit and we look forward to a great relationship with Beyond Meat.”

“And I’m excited to have my two favorite LA brands partnering to make plant-based eating not only delicious, but accessible.”

The deal kicked off with the plant-based startup serving vegan burgers outside of the Lakers’ El Segundo solar-powered training facility.

“Over the years, we’ve been fortunate to work with many of the world’s greatest athletes as they explore Beyond Meat and the impact plant-based eating has on their performance, their recovery between games and workouts, and the broader benefits to health and environment,” said Brown.

“As an LA-based company, we are excited to team up with one of LA’s most iconic brands to engage our local community and further amplify awareness of our delicious plant-based meats that serve both body and planet.”

Where will veganism be in the next 10 years? Share your thoughts in the comments section below!