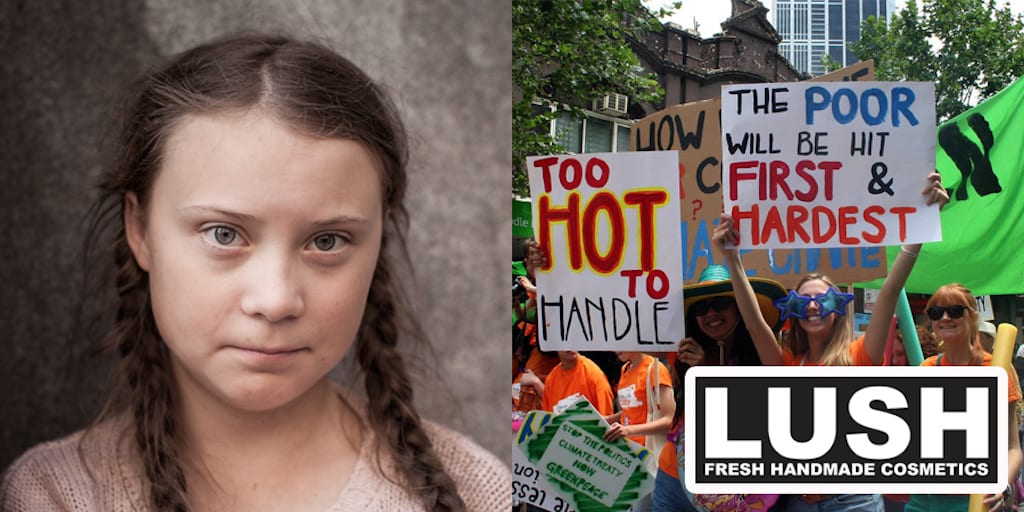 Cosmetics retailer Lush will close all its outlets, headquarters, manufacturing facilities and e-commerce operations in the US and Canada to participate in a climate strike led by Greta Thunberg.

Lush has announced that it will join hands with the renowned youth climate activist to stage a protest on September 20 in the U.S. and September 27 in Canada.

The brand will close down all 250 of its North American locations in support of climate action.

She skipped school every Friday to protest against world leaders’ lack of action on climate change.

Thunberg will lead the Global Climate Strike aimed to call for decisive global action on climate change ahead of a major United Nations summit in New York on September 23.

Despite being in peak business time, President and CEO of Lush North America Mark Wolverton is committed to the scheduled strike.

Lush will not only close its shops on strike day but is also encouraging its 5,000 employees and millions of followers to join the campaign.

Wolverton said: “As a business with deep roots in environmental activism, giving our thousands of staff the time to get out there and demand bold action is a no brainer.

“We all share this planet, so we need to band together to sound the alarm and show our politicians that ‘business as usual’ is no longer an option. The climate crisis won’t wait, and neither will we.”

The strike has been gaining global mileage and millions of people around the world are expected to take part in the protest.

Large turnouts are expected in New York, Berlin and London, and strikes have been organized across Africa, Latin America, the Pacific, Canada, the United States, Asia and Europe.

As of September 9, more than 230 companies have agreed to be part of the alliance and have pledged to allow employees to strike including Ben & Jerry’s, Patagonia, Future Super, Canva,  Bank Australia and personal care firm Seventh Generation.

Lush, an exclusively handmade cosmetics brand, has been trying to reduce its environmental impact for many years.

Lush also uses solar energy to conserve all of its retail energy consumption.

The cruelty-free brand has also donated $12 million to 715 elementary organizations working for environmental justice over the last decade.

How influential will the climate strikes be? Share your thoughts in the comments section below!