Lymm gets its first floating vegetarian and vegan cafe 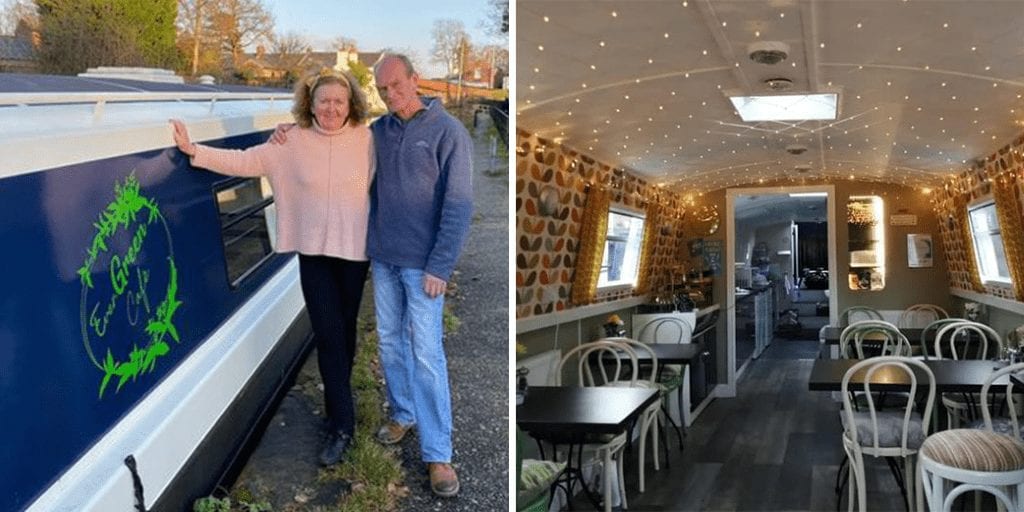 Evergreen café has opened on a canal boat in Lymm and will serve plant-based versions of classical comfort foods.

Knutsford couple Kate and Ric Pakenham-Walsh bought a 55x10ft vessel named Grace from a boatyard in Northwich and built a warm and cosy joint called the EverGreen Cafe on the widebeam boat.

The cafe is situated on Boat Stage, off Bridgewater Street in Lymm town centre.

“She was a typical, run-down, old-fashioned style inside but we got on board and fell in love with her. I just got that vibe,” said Kate.

The couple ran a mobile catering business together and have opened this café in a bid to cater to people looking for plant-based options.

“There’s nothing really in Lymm that’s vegetarian or vegan-based and what’s the point in competing with things that are already there?” said Kate, who is a vegan herself.

“Nobody wanted me to do it, that the vegan thing was a bit too far-fetched being so far out of Manchester, but I said: ‘No, we have to bring it’.

“I’m doing it, I’m enjoying it, I just need everybody else to get on board – literally,” she added.

The couple are excited with their new project and despite their age, were eager to take the plunge.

“Ric and I work well together and it’s nice for us to be doing this together,” said Kate.

“We’re no spring chickens anymore but it’s an adventure.”

Kate said she asked the locals about the dishes they wanted to eat before curating her menu: “I asked local vegetarian and vegan groups what they wanted to see and they said they were sick to death of hummus and falafal, can they just have some food they were used to like lasagne and cottage pie – but make it vegan?”

“I thought: ‘Do you know what? That’s me.’ It was a lightbulb moment. I can do that, because that’s what I cook for myself at home, and the people who aren’t vegan or vegetarian can look at it and think: ‘I know that’,” she continued.

The owner said that she will also source vegan-friendly and gluten-free cakes from local bakeries.

However, the couple wants to be able to serve everyone and not remain exclusive, which is why they’ll also have cow’s milk and butter on offer for customers who don’t want plant-based alternatives.

I’m not here to preach or convert but it’s good to try something different, healthy and definitely tasty ,” writes Kate on her Facebook page.

The cafe is open from 10am to 3pm, Wednesday to Friday, and 10am to 4pm on Saturdays and Sundays.

Let us know what you think about this floating vegan cafe in the comments below!