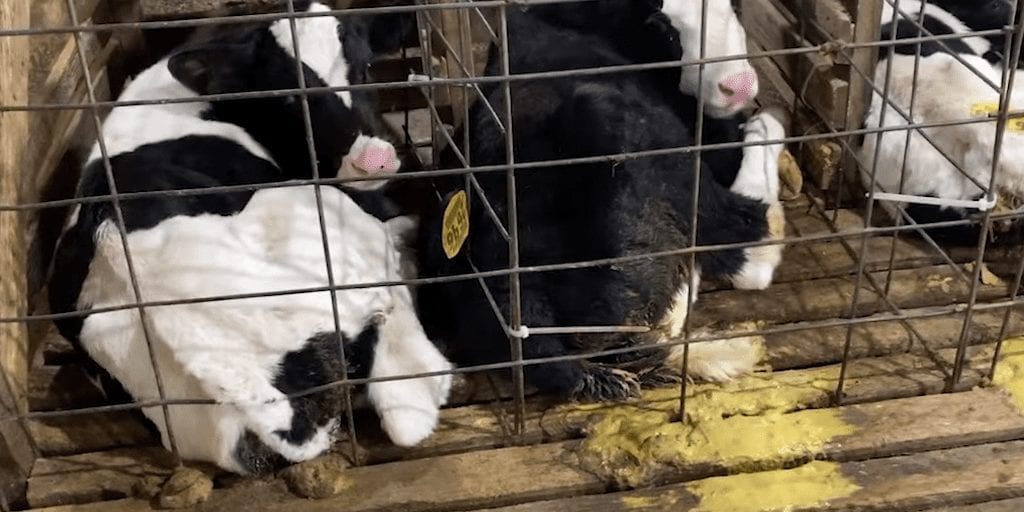 An undercover investigation into major US dairy and veal farms has revealed calves living in horrific conditions – reportedly kept in tiny dark spaces for up to 20 hours a day and countless animals dying from disease and starvation.

The farm deals with an estimated 30,000 dairy veal calves in the Tri-state region of Indiana, Michigan and Ohio.

ARM claimed calves were transported from Fairlife Farms – a major dairy farm which was exposed for horrific abuse in an investigation earlier this year.

Investigators at Strauss Veal Feeds reported ‘brutal and inhumane handling during loading and transportation and continual confinement in abhorrent conditions’.

ARM reported that in the ‘nursery’ facility, calves were imprisoned for eight weeks in 2.5 by 5 foot crates – so small that they could not perform natural movements or turn around, while they are forced to live in their own excrement, activists explained.

Investigators said calves were forced to live in pitch dark for up to 20 hours a day, and an ARM member said they were told lights and ventilation were being turned off for as long as possible to save money – leading to temperatures exceeding 100 degrees and many calves dying of overheating and exhaustion.

The investigation was carried out by a retired Sheriff Deputy Detective who was hired by the farm as a ‘caregiver’.

“What the ARM investigator witnessed was shocking and medieval,” Richard Couto, ARM Founder, said in a statement.

“It is surprising that the veal industry, which solely relies on dairy calves to operate, is still legally in existence.

“The crime here is the life of the calf. Living in a disease infested barn and a stall that he can’t move in.

“With the next step being the innocent animal’s brutal and torturous death in a disgusting slaughterhouse.”

Calves were also found to be suffering dysentery, ear infections and stomach viruses, with 10 to 20 calves dying daily during the investigation.

ARM also claimed it did not witness any veterinarians tending to the calves’ wounds and illnesses, and hungry calves were left to starve to death.

Investigators say staff at the farm would write ‘NO’ on the crates – indicating the calf should no longer be fed or given water.

“Calves that were too sick were dragged into the isle and left to die, in order to make room for new incoming calves,” ARM claimed in a statement.

Share this article to show the world the reality of the dairy and meat industries. What do you think of the investigation? Share your thoughts in the comments below.