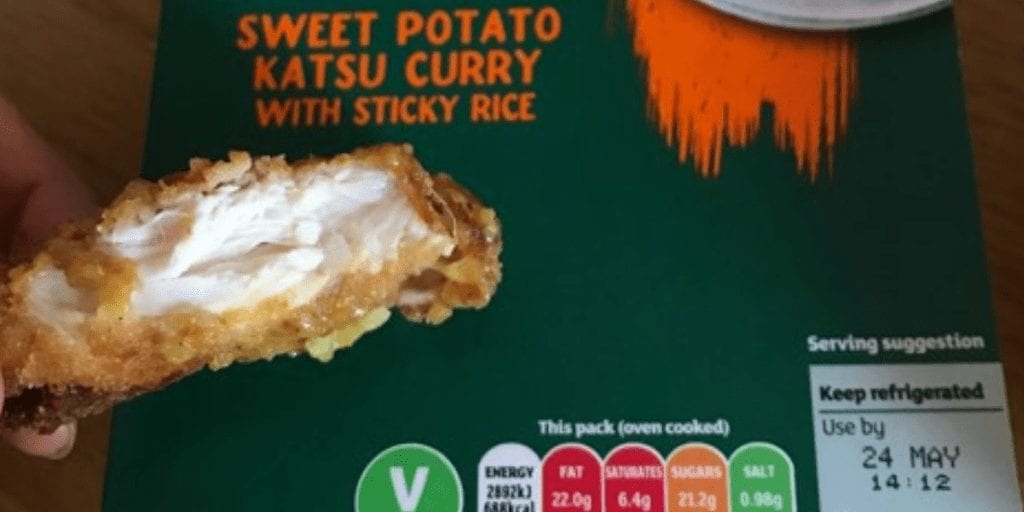 Sainsbury’s is conducting an urgent investigation into the product

A vegan mother was shocked when a plant-based meal from Sainsbury’s turned out to have chicken inside, but the abuse she received after posting a complaint on the supermarket’s Facebook page was even more upsetting.

She gave the meal to her vegan son for dinner, but he found a piece of chicken lying in the sauce.

“He was extremely upset when we chopped into the last piece and discovered it was chicken. He has never eaten meat and he was really sad to think he could have bitten into it,” she told Totally Vegan Buzz.

Davies said she now has ‘serious concerns’ over the supermarket chain’s vegan products.

The supermarket has since told Totally Vegan Buzz it is conducting an urgent investigation into the product following numerous complaints about the curry.

After discovering the chicken, Davies posted on the Sainsbury’s Facebook page to explain the problem, and said others reported similar issues with the same product.

“It’s so upsetting and worries me that other curry’s may be affected,” she added.

But her experience was about to go from bad to worse, as the post was met with an onslaught of attacks from meat eaters.

“I had so much horrible abuse off meat eaters, saying I was a child abuser for having my son be a vegan, calling me a liar,” she said.

Many users said they thought it was likely that people had purposefully switched the sleeves of the curry ready meals to spite vegans and trick them into eating meat.

“People commented on the post saying from now on they’ll be swapping the sleeves on vegan meals just to upset vegans,” Davies explained.

“Sainsbury’s said they would conduct and internal investigation, but would not provide feedback to me on the outcome which I expressed to them was very disappointing as I just wanted to know how this could happen.

“I often buy vegan products from Sainsbury’s and it has now made me question their production methods and safety given the cross contamination of this kind.”

Sainsbury’s offered Davies a £15 voucher and asked to take the sample for testing.

A Sainsbury’s spokesperson told Totally Vegan Buzz: “We received a very small number of complaints last week about a specific batch of the Love Your Veg! Sweet Potato Katsu Curry.

“Our supplier has strict controls in place to prevent this from happening and we’re urgently investigating what went wrong in this case.”

What do you think of the issue with the Sainsbury’s curry? Share your thoughts in the comments below!