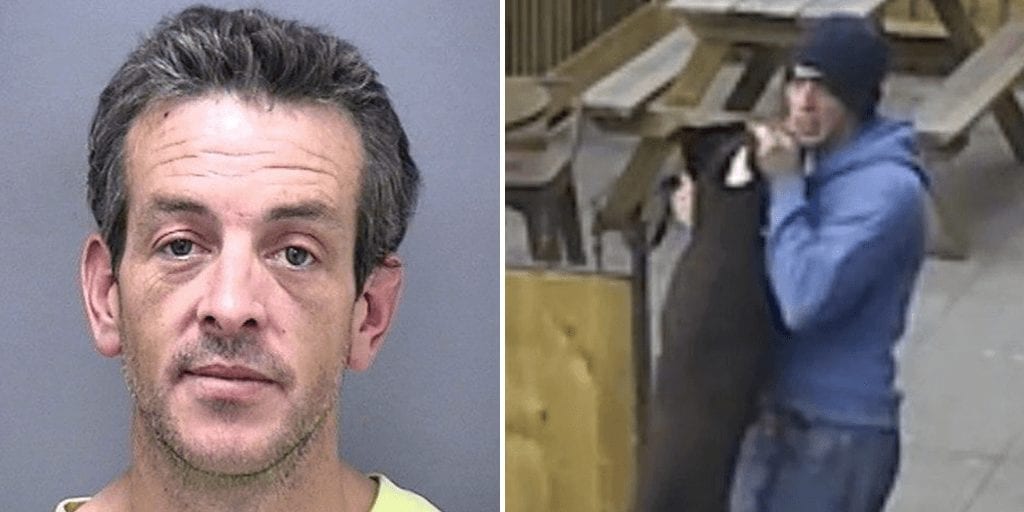 ‘Anyone capable of repeatedly punching a dog in the face is likely to pose a serious threat to all living, feeling beings’

The incident happened in a beer garden in Bournemouth, Dorset, where CCTV cameras captured the 40-year-old losing his temper at the pit bull-type dog.

He was seen pinning the pup by its neck before throwing it against a wall, and kicking and hitting the helpless canine repeatedly on the head.

Police investigating the alleged animal cruelty incident issued a CCTV appeal at the time in order to identify Elsworthy or the owner of the dog.

After evading the law for a year, Elsworthy finally appeared before Poole magistrates on Friday August 21 and pleaded guilty to the charges.

The court slapped Elsworthy with a three-year ban on keeping animals along with an order to carry out 80 hours of unpaid work. He was also ordered to pay a victim surcharge of £85 and costs of £85.

Elsworthy was also held guilty of failing to surrender to custody at Poole magistrates’ court on August 9 last year for which he was ordered to complete an additional 100 hours of unpaid work.

However animal charity PETA claimed the punishment is too lenient for the extent of the offence, the Mirror reported.

“Anyone capable of repeatedly punching a dog in the face is likely to pose a serious threat to all living, feeling beings,” Elisa Allen, director of PETA, said.

“While we are relieved that this man is banned from keeping animals for life, it’s imperative that, in addition to his community service, he undergo counselling.”

She added: “History shows that violent criminals often start by harming animals, so his anger-management issues need to be addressed – otherwise he remains a danger to all Bournemouth residents.”

Share this story: Footage shows an angry man throwing a dog against a wall after kicking and slamming his head.