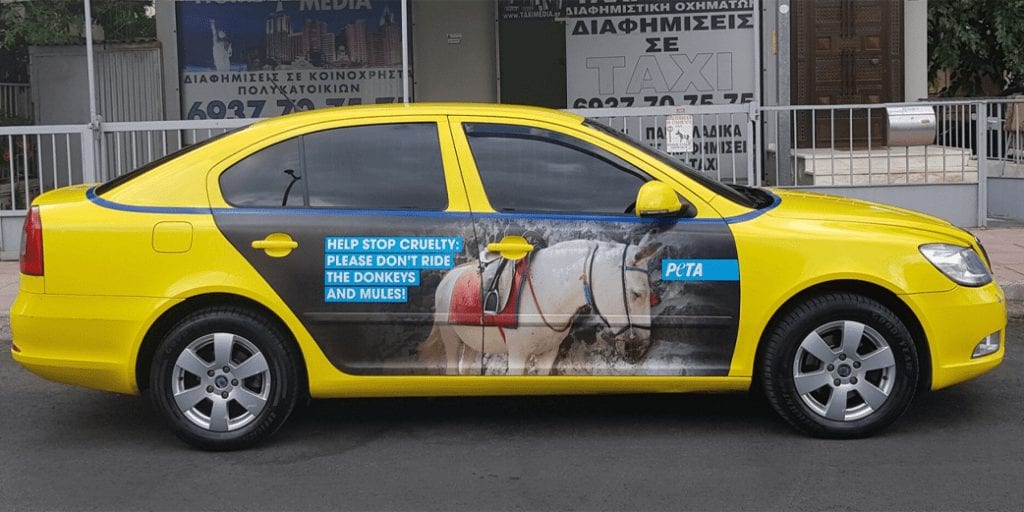 A huge ad campaign in Greece is urging holiday-goers not to pay for cruel donkey rides.

Santorini officials refused to run adverts from PETA which highlight the suffering of donkeys and mules used as “taxis” on the Greek island.

But PETA Germany has refused to be silenced, and has bombarded neighbouring ports, ferries, taxis, buses, billboards, and cargo bikes with the powerful campaign.

Over 100 adverts reading “Help stop cruelty: please don’t ride the donkeys and mules!” are now visible in the popular Greek coastal towns of Rafina and Piraeus.

The campaign follows a recent PETA eyewitness exposé revealing that handlers drag animals down steps and whip and hit them with sticks to make them continue walking.

“It’s a disgrace that gentle donkeys are being marched into the ground as they’re forced to work day in and day out with no relief from the hot sun,” PETA Director Elisa Allen said in a statement sent to Totally Vegan Buzz.

“PETA is calling on tourists to avoid these cruel rides while urging Greek authorities to step up and stop this abuse.”

A new law passed this year prevents donkey and mule owners in Santorini from burdening their animals with weights exceeding 100 kilograms.

But PETA explained that according to veterinary recommendations, donkeys shouldn’t carry more than 20% of their body weight – approximately 50 kilograms.

When not being made to carry extremely heavy loads on their backs, they’re often tethered in the blazing sun without access to water or shade.

Will PETA’s adverts stop holiday-goers from riding donkeys? Share your thoughts in the comments section below!