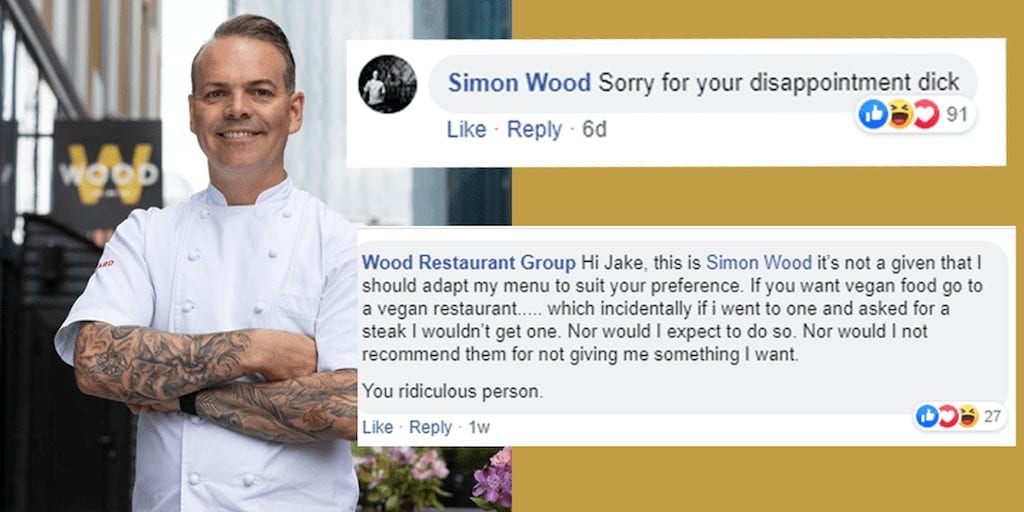 It may be 2019, but some chefs still haven’t quite managed to adapt to the trend towards plant-based living.

No more so it seems than Simon Wood, who you might expect better from having won MasterChef in 2015.

Since earning his title the chef has founded WOOD Restaurant Group, but he hasn’t quite adapted to the trends and refuses to offer any vegan options.

And to make matters worse, he even regularly lashes out at disappointed vegan customers on social media.

McCormick describes Wood’s attitude as ‘aggressive’ and says he had an embarrassing approach to veganism.

“Being very rude, and excluding a huge and growing percent of the UK isn’t a great business move,” McCormick wrote. “Hugely disappointed.”

Rather than remain professional or apologise for the lack of vegan options, Wood immediately abused the customer using his personal Facebook account.

“Sorry for your disappointment d—,” he wrote.

McCormick then pointed out that ‘Being called a d— by a chef is a little bit unprofessional’.

Norris gave a similar review of the restaurant, saying the chef “can’t adapt to cook vegan food” and added that the experience was disappointing.

This time the restaurant’s main account went on the attack: “It’s not a given that I should adapt my menu to suit your preference.

“If you want vegan food go to a vegan restaurant….which incidentally if I went to one and asked for a steak I wouldn’t get one. Nor would I expect to do so. Nor would I not recommend them for not giving me something I want. You ridiculous person.”

What do you think of Simon Wood’s treatment of the vegan customers? Share your thoughts in the comments section below!