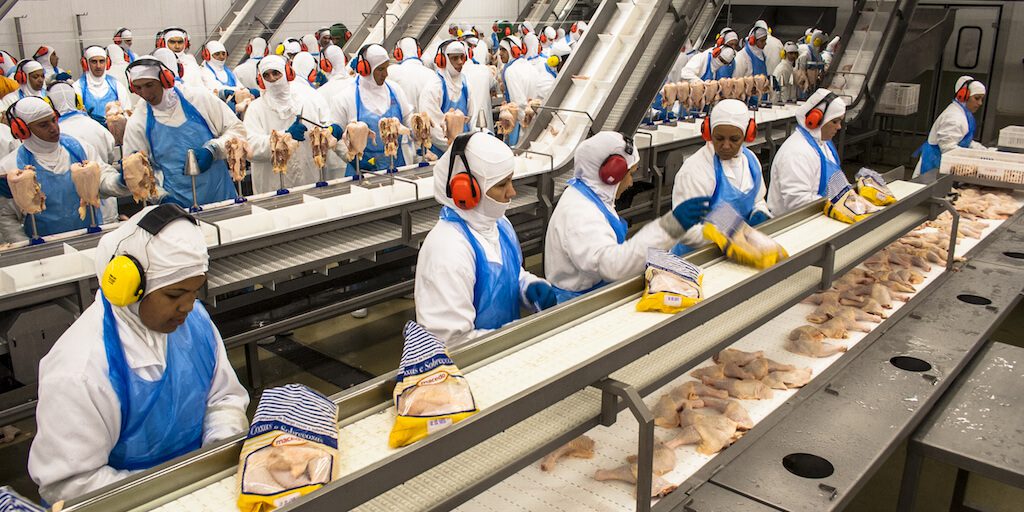 ‘They ain’t offering nobody no disability, no unemployment, no time off”

Meat workers in US slaughterhouses are being forced to report to work even as reports of more and more workers contracting the virus at these plants are coming to the fore.

The Midwest Center for Investigative Reporting tracking Covid-19’s impact on meatpacking workers and industry reported that up until 4 May, there were at least 9,300 reported positive cases linked to meatpacking facilities across 164 plants in 27 states. Additionally, at least 40 workers have died at 21 plants across 15 states.

While more than 20 of the country’s meat plants halted their operations or shut down to prevent the spread among workers, meat giants Tyson and Smithfiled warned that the country would face acute meat shortages further disrupting the food chain if plants remained closed.

According to Reuters, the order was issued to only provide a legal cover with more liability protection to the plants in case employees contracted COVID-19 as a result of having to go to work.

With the orders in place, meat workers are under even more pressure to work amid the pandemic further risking their lives.

In interviews published in a Guardian report, workers revealed how the new order has made it even more difficult for them to fight for their workers’ rights.

Tara Willams, a 47-year-old worker at Tyson Foods poultry plant in Camilla said: “I was devastated and I was hurt. Because now, to be truthful – and excuse my language – Tyson really aren’t going to give a f**k about us at all.

“For us employees that work in production, we are treated like modern-day slaves.”

Another migrant worker at a non-unionized Tyson poultry plant in Springdale, Arkansas echoed Williams’ concerns. She said the company was not enforcing social distancing.

“We are all given bathroom breaks at the same time and there are hundreds of us waiting to use them. There are only seven bathrooms,” she said.

“They [Tyson] don’t care about the worker. They don’t care if we get sick.”

The negligence and mistreatment has been recorded in other facilities as well.

One African American worker at a Koch facility told the Guardian on condition of anonymity that while Koch had recently begun taking workers’ temperatures before shifts, they were not revealing any details of how many workers had contracted the virus.

He added that although the company was distributing surgical masks, he claimed workers were forced to use them several times over.

“They ain’t offering nobody no disability, no unemployment, no time off,” the worker said.

“I just keep my hands washed up, my face covered up, my whole body covered, and I pray to myself and hope I don’t catch it. The truth is there’s a chance that everybody in [here] will catch it.”

While Koch Foods has not released any statement, Tyson spokespersons said a number of measures were in place to protect workers’ health including social distancing measures, protective gears, a relaxed attendance policy to “reinforce the importance of staying home when sick”, and extra incentives to continue working among others.

Share this story to reveal the dangers of the meat industries on public health.