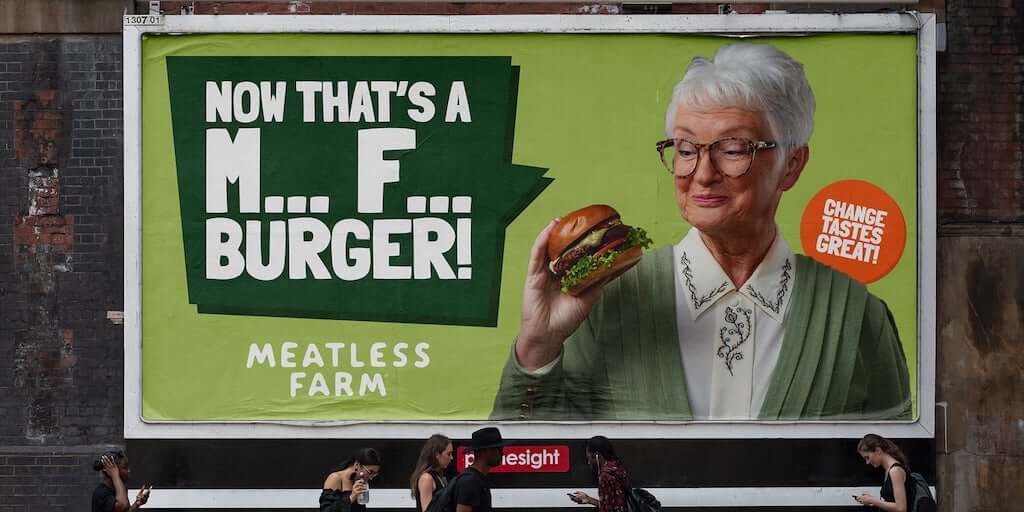 According to the brand, the campaign’s ‘Now that’s a M*** F*** burger’ slogan has been purposefully chosen to give the nation “a bit of a lift” during the coronavirus lockdown.

“We felt the nation needed a bit of a lift as it’s been a tough time for everyone, so more than ever we wanted to create something light-hearted and fun that consumers would remember when they are looking for alternatives to meat, ” said Meatless Farm’s chief growth officer, Michael Hunter, in a statement.

The £1.5 million campaign, the biggest for the brand yet, will appear on TV radio adverts, 12 branded electric cars across London, billboards, social media and supermarket packaging throughout August and September.

According to market research firm Nielsen, Meatless Farm is the fastest growing UK brand. Its sales have nearly tripled – up by 179% year on year as more people avoid meat for health, environment and welfare reasons. The firm’s research data also shows that more than a third of Britons have started eating more plant-based foods during the pandemic.

“Throughout lockdown we’ve seen a surge in sales, with more and more Brits trying or considering making the swap to plant-based, even if it is just once a week,” said Hunter.

The eye-catching campaign slogan has already become a hot topic on social media with fans branding the ad a “ marketing genius” although the Advertising Standards Authority (ASA) said it will investigate the advert for “decency,” the Guardian reported.

“Brilliant campaign guys. Massive well done – glad it’s finally out there for the world to see!!!,” wrote one Instagram user.

“Love it. Well done whoever came up with that,” wrote another.

Share this story to let others know about the rapidly increasing plant-based food market.