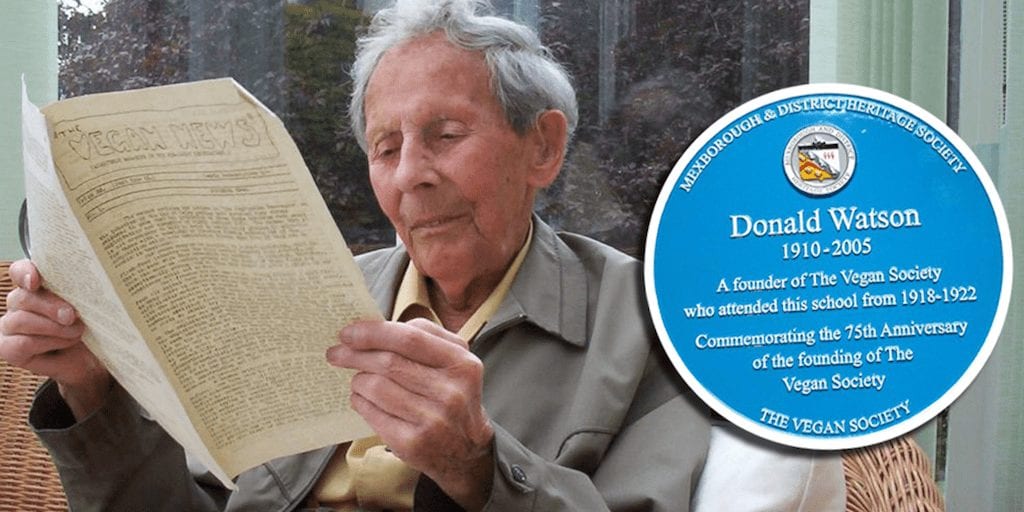 The New Pastures Primary School in South Yorkshire has installed a blue plaque to honor the memory of Donald Watson- co-founder of The Vegan Society.

Donald Watson coined the word “vegan” to describe non-dairy vegetarians and produced the first copy of the Vegan News in 1944.

He co-founded the Vegan Society with five other like-minded individuals to ‘promote the development and use of animal-free alternatives for the benefit of humans, animals and the environment’.

At the age of 14, Watson ditched meat after witnessing a pig being slaughtered on his uncle’s farm. Later he turned vegan after concluding that dairy products were unethically obtained.

Watson lived to the ripe age of 95. Shortly before his death, he said: “It is not every day a movement is born which in its general application could revolutionize mankind.”

Samantha Calvert, spokeswoman for The Vegan Society, said: “We are delighted that the Mexborough and District Heritage Society is paying tribute to one of the sons of Mexborough who has done so much to make the world a more compassionate place,”

“This will be the first time that we are aware of that any of our founders has been honored in this way.

“Donald Watson played a significant role in founding the modern vegan movement that is now this amazing worldwide movement.

“Veganism has never been more popular than it is today, and all vegans owe a huge debt of gratitude to Donald Watson and the pioneering early members.”

The vegan Society is celebrating its 75th anniversary this year and has reported that its members have grown in the last five years to include over 600,000 Britons.

What else can be done to honor pioneers of the vegan movement? Share your thoughts in the comments section below!