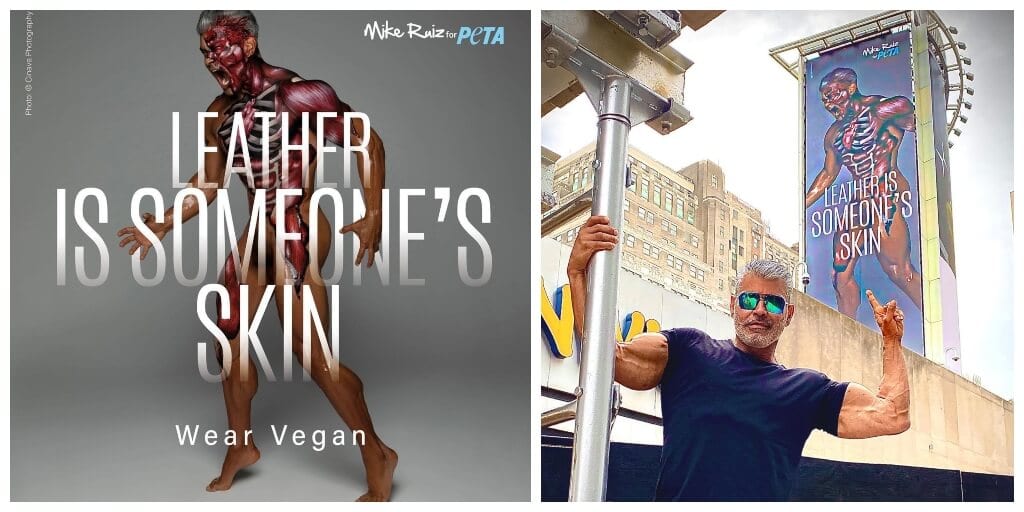 “The leather industry kills over a billion animals every year, pollutes the environment, and produces items that are as unexciting as they are cruel.”

Vegan charity PETA has constructed a 70-foot-high billboard in the middle of Manhattan which shows Ruiz naked and screaming, as his skin seems to have been flayed from his body.

It hopes the graphic imagery will ‘stop people in their tracks and persuade them to ditch animal skins’.

According to the organization, leather production is ‘unacceptable’ killing over a billion animals every year.

In addition, leather is also just as much of a disaster for the environment as it is for animals. Its production requires the use of 130 chemicals—including cyanide—and releases massive amounts of carbon emissions – a leading contributor to climate change.

It adds that high-tech and pioneering materials like lab-grown leather, mycelium (mushroom) leather, apple, pineapple, and cactus leather, bioplastic leather, and countless other emerging materials are emerging across the globe, making the use of animal skins completely unnecessary and archaic.

“The leather industry kills over a billion animals every year, pollutes the environment, and produces items that are as unexciting as they are cruel,” the pitbull and anti-fur advocate said in a statement released by PETA.

“My friends at PETA and I are encouraging people to wear their values and take pride in coming out of the closet in beautiful, fashion-forward vegan pieces.”