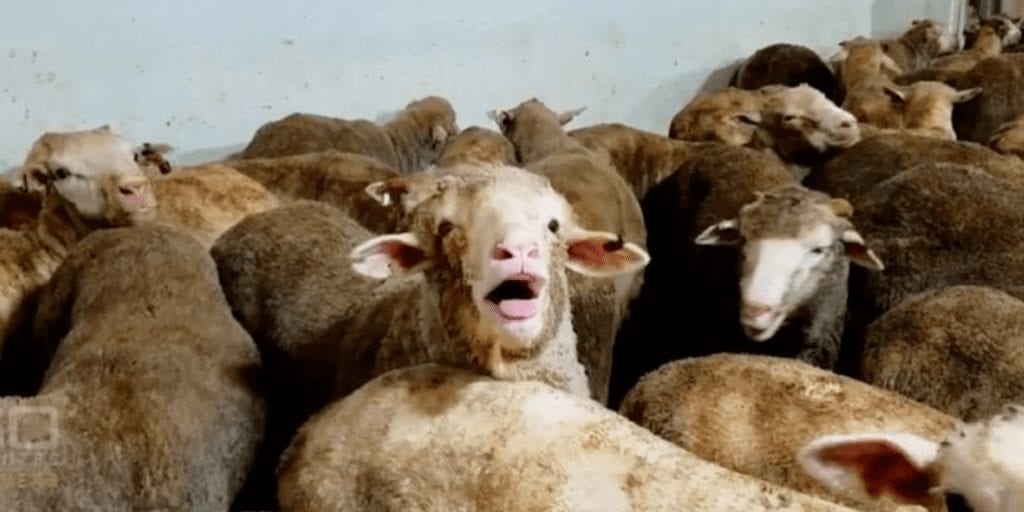 The Australian government has been accused of backtracking on promises to protect live sheep from horrific conditions onboard export ships.

The RSPCA said authorities have made a ‘backflip on animal welfare safeguards’ in a new document which gives options for export ships which supply the Middle East.

The industry has been under intense scrutiny since an investigation last year revealed sheep carcasses being thrown overboard on export ship the Awassi Express, while other animals crammed on the boat displayed signs of severe heat stress. The investigation built on mounting evidence of animal abuse in the industry.

The company is now facing charges of animal cruelty, and activists say scenes such as these are commonplace in an industry which exports 2 million animals a year.

The investigation sparked a review of heat stress risk assessments – with a view to changing how much space sheep are required on export boats.

A new discussion paper gives four possible options to govern the trade between Australia and the Middle East, which will come into effect from 2020.

But of all four options outlined by agriculture minister Bridget McKenzie, only one, option three, mentions changing heat stress regulations.

It would also reduce or potentially ban any export between the hottest months of May to September.

The RSPCA said option three is the only reasonable option, and blasted the government for including three options which would leave sheep suffering horrendous and fatal journeys.

“The only viable option to protect the welfare of Australian live exported sheep while the trade continues is to prohibit the highest risk months of the year … and introduce the revised heat stress risk assessment model, which the government has already committed to doing on multiple occasions,” the RSPCA said in a statement.

Option one in the paper keeps the same heat risk assessment model which has allowed sheep to suffer for many years, but it does ban exports during the three hottest months during the summer.

The second option also kept current heat stress laws but includes a ban from June 1 to September 22, and the final option gives no restriction on trade at all.

The RSPCA said options two and three would need to be combined.

“Any other course of action is not backed by the science or evidence; and represents a backflip on the government’s previous assurances, as well as an unmitigated failure to act on the community’s concerns,” it argued.

This summer’s ban ended last month, meaning sheep are continuing to be crammed on export boats in their millions per year.

A report released in July revealed that thousands of sheep died in horrific conditions on-board export ships from Australia.

Many die from overheating while in pens neighbouring oil fuel heaters, or from smothering as the animals crowd around air vents for relief.

The report revealed that 600 sheep died in total on the Kuwait-flagged ship Al Shuwaikh from Australia to the Middle East in May and June last year.

However, despite the shocking conditions and hundreds of deaths, the voyage complied with the Australian standards for the export of livestock.

The report added to concerns over welfare standards, after last year an investigation revealed that 2,400 sheep died on an Emanuel Exports ship from Fremantle to the Middle East in August 2017.

WARNING: The below video features graphic imagery which viewers may find distressing

What do you think of the Australian government’s record on animal welfare? Share your thoughts in the comments section below!