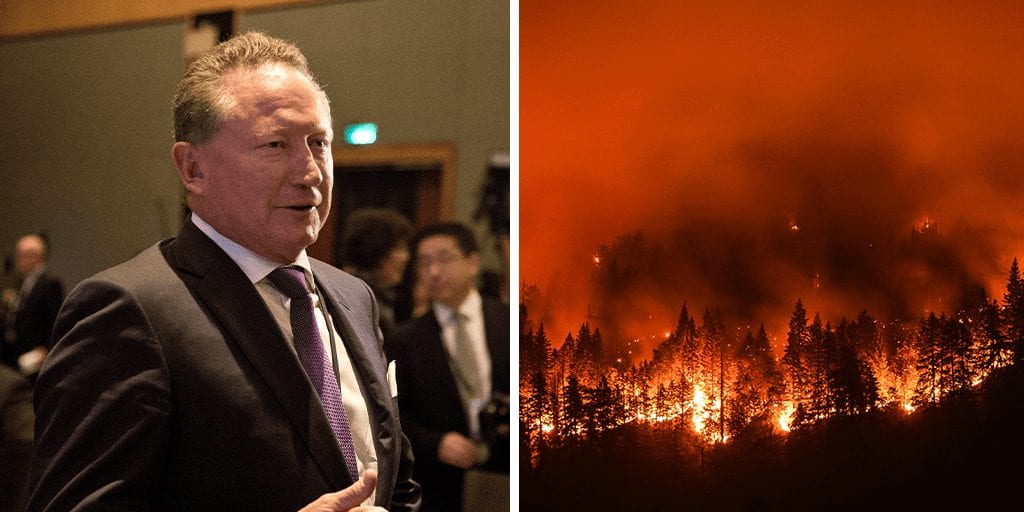 The boss of a huge mining company has claimed that arsonists are to blame for the bushfires which have devastated Australia.

Andrew Forest is the founder of Fortescue Metals, and while he has pledged $70 million to help recovery efforts the billionaire said climate change is only a ‘small part’ of the problem.

Experts have pointed to climate change as a leading cause of the unprecedented fires, as global temperatures rise at an unsustainable rate.

While Forrest made a contribution to the recovery efforts, with his donation set to be invested in strategies to support recovery and prevention, he refused to say that Australia needs to do more to prevent climate change.

“A warming planet is but a small part of what is happening out there in Australia. As you know, a large proportion of these fires have been lit by arsonists,” he said.

“We need to create not the politics, but the science, the management, the leadership techniques.

“We are putting $50 million on the table to create resilience in order to encourage other companies and philanthropists from Australia and around the world to build a resilient Australia so we might avoid a tragedy striking to this extent ever again.”

Victoria police have said in a statement that there was no evidence the fires were started by arsonists.

Forrest came under intense scrutiny for his comments. After being heavily criticised by environmental activists and climate experts he backtracked on the comments.

“I accept that the warming of our planet is a primary cause of the catastrophic events we have been experiencing,” he said.

“I do not want people to think that criminal behaviour, while reprehensible, is the main reason for the devastation this bushfire season.

What do you think of Andrew Forrest’s comments? Share your thoughts in the comments section below!