Miyoko’s Creamery launches plant milk cheddar sticks in the US 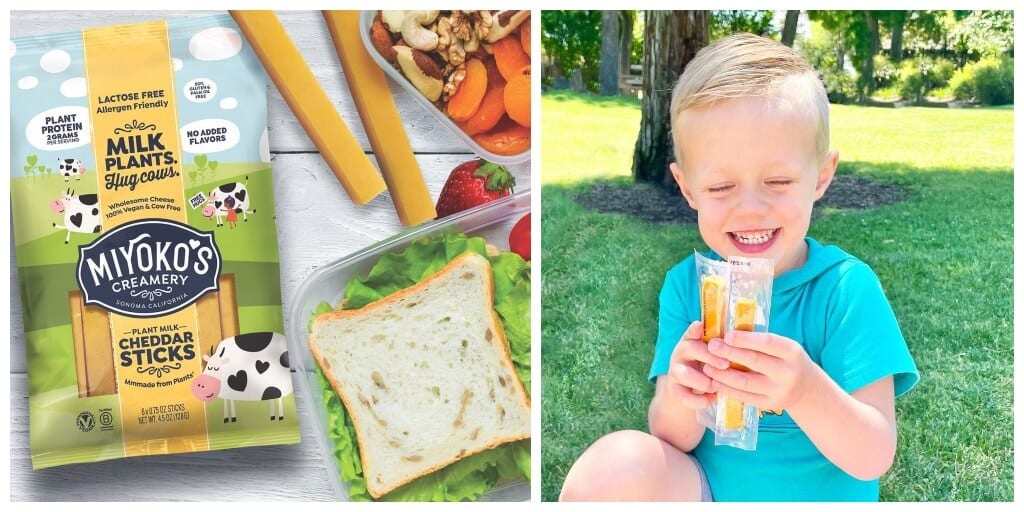 “These vegan cheese sticks deliver all the goodness that plant milks have to offer in a convenient form while supporting a more compassionate food system.”

Miyoko’s Creamery has rolled out its new vegan cheddar cheese snack products in the US.

The plant-based dairy giant’s new vegan cheddar sticks are made using oats and legumes and are free from lactose, soy, cashews, and gluten.

They come in individually wrapped packets containing six cheddar sticks. Each serving provides 2g of plant protein plus an on-the-go snacking option that is kinder to cows, children, and the planet.

“For a while now, parents have been craving more family-friendly cheese snacks, so we’re very excited to debut our one-of-a-kind Vegan Cheddar Sticks,” Miyoko Schinner, founder and CEO of Miyoko’s Creamery said.

“These vegan cheese sticks deliver all the goodness that plant milks have to offer in a convenient form while supporting a more compassionate food system.”

This family-friendly snack can be purchased online or in Whole Foods Market stores nationwide for an RRP of $4.99. A bigger rollout is due in August.

Miyoko’s Creamery offers a selection of more than 25 plant milk cheeses and butters.

Last year it launched a line of cheeses and butters made from allergen-friendly oats, potatoes, and legumes.

The brand’s products can be now found at nearly 20,000 retailers nationwide, including Whole Foods, Target, Trader Joe’s and Walmart as well as in-home delivery services like Amazon Fresh and Instacart via select retailers.

Miyoko Schinner – the name behind this vegan cheese empire – recently featured in the Forbes 50 Over 50 list curated to celebrate a diverse group of female leaders that have changed the world after becoming 50.

“The 50 Over 50 list spotlights women who are rewriting the rules of success, shattering the prevailing misconceptions about age and gender in the workforce, and inspiring women—and men—through all stages of their careers,” ForbesWomen Editor Maggie McGrath said.

“By telling the stories of these incredible women, and highlighting how they are making a difference in their community, industry or the world, we can also have critical conversations about the need to acknowledge the misconceptions about age and gender, and begin to change them.”

Share this story: Miyoko’s Creamery launches plant milk cheddar sticks in the US.