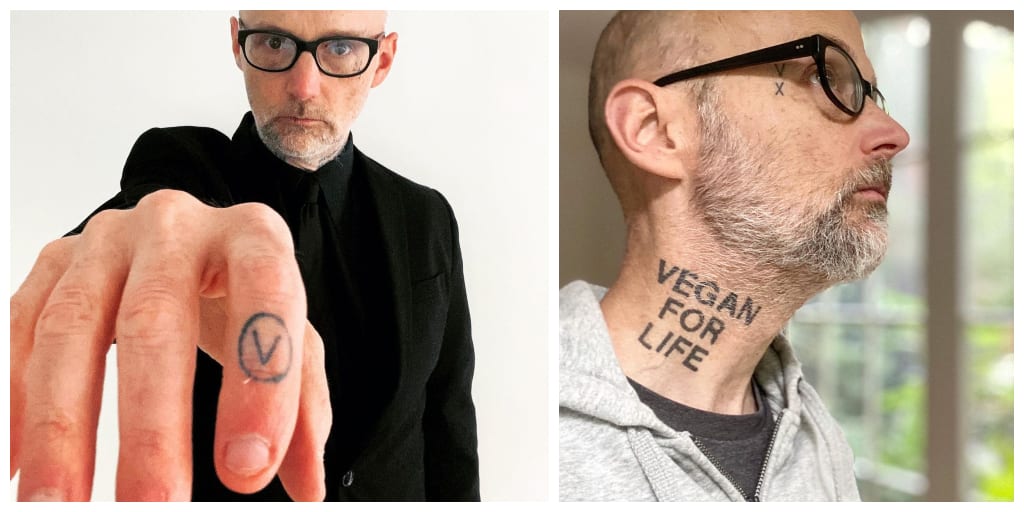 “Increased spillover events are happening are because of our increased contact and encroachment with wildlife—which is more a symptom of resource scarcity and population growth.”

Moby has been called out for saying there would be no pandemics in a vegan world.

The musician, writer, and animal rights activist, is facing backlash after he took to Twitter and Instagram to post that “100% of pandemics are zoonotic in origin. Key word: Origin.”

The post is accompanied by an image of Moby pointing at the camera and showing off a ‘v’ tattoo on his index finger.

According to health experts, while many pandemics and epidemics are diseases that are transferred from animals to humans (zoonotic) – not all of them originate through eating animal products.

For instance, malaria is spread through mosquito bites, cholera is waterborne and even the bubonic plague has been traced to fleas on rodents.

A reminder: in a vegan world there would be no pandemics. 100% of pandemics are zoonotic in origin. #veganforlife pic.twitter.com/t9oEvtU1tS

Richard Reithinger is the vice president of Global Health, RTI International. He told Metro: “Consumption of meat and animal products are only one of the many ways that pathogens can spillover from animals to humans.

“Other channels include animal husbandry or contamination of foods through animal fluids/faeces.

“Ultimately, the reason why increased spillover events are happening are because of our increased contact and encroachment with wildlife—which is more a symptom of resource scarcity and population growth.”

As expected, Moby’s post has sparked a debate online with many slamming the 55-year-old for what they described to be a ‘grossly anti-indigenous post’.

One user tweeted: “Veganism is highly unsustainable and only for the exceptionally privileged. Humans lived for millennia in balance with nature, sustainably, while respecting all that which they hunted for food.”

Another added: “Yeah, a lot of those plagues aren’t getting into humans by being eaten. It’s contact, or insects biting us after biting animals, etc. Being vegan isn’t going to stop them happening.”

Dr. Jonathan Kolby wrote: “When land is converted for agriculture, animals are flushed out of their natural habitats & come into contact with people living & working in these areas more often. In a #veganforlife world you still have pandemics. They can also come from pets.”

However, many jumped to defend Moby’s comments. One user tweeted: “He’s not talking about “a diet” eliminating viruses directly, but about the grossly unsanitary conditions of mass animal agriculture – required to maintain meat diets – causing viruses in the first place. Covid would not have the opportunity to emerge.”

Another wrote: “ Anger in these comments shows bold ideas are sometimes uncomfortable and difficult to accept. But you could be right. You never seem to hear about the latest strain of ‘SARS outbreak from quinoa’ or ‘Tofu flu’.”

Share this story: Moby faces backlash for saying there would be ‘no pandemics in a vegan world’.