Moby Gets ‘ANIMAL RIGHTS’ tattooed down both his arms 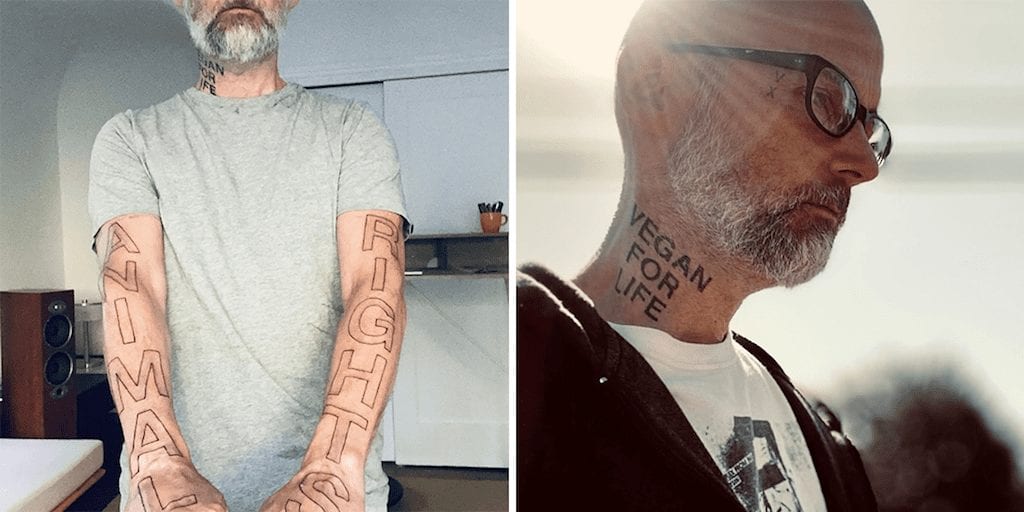 Moby has got himself inked with 12 tattoos to celebrate his 32nd vegan anniversary.

After getting a bold “Vegan For Life” tattoo drawn on his neck barely two months ago, Moby posted another insta image on November 12 that showed him with ‘Animal Rights’ inked across his arms in huge letters.

He captioned the image: “As November is my 32 year vegan anniversary I thought I’d get a tattoo (well, technically 12 tattoos) to celebrate.

“I’m a vegan animal rights activist for many reasons, but ultimately because I believe at the core of my being that every animal has the right to live their own life, according to their own will.”

His tattoos became a hot topic for discussion on the social platform with friends and fans expressing their varied opinions.

Animal rights organization PETA praised the musician stating: “??? Animals are so lucky to have you making a difference daily ?”

“Love it!! Thank you for always speaking out for the animals,” wrote a fan.

“??❤️! Thank you for caring, acting and voicing so much. I admire you,” commented another

Others were not impressed.

“You have lost your damn mind,” wrote one user.

“(As a vegan) Moby this looks stupid!” another commented.

“I mean, cool. But those tatoos ain’t it chief,” expressed a third.

“Bro, I believe your love… But you could just promote it with your heart and soul,” remarked a fan.

Moby has been vegan since 1987 after being inspired by his family’s rescue cat Tucker and has been a passionate animal rights activist using his stardom to speak up for veganism, animal rights, as well as environmental issues.

In an earlier social media interaction, the 54- year old said: “For me, nothing else in my life, including my own life, is more important than working on the cause of animal rights.

“To reduce human illness and suffering, to save the rainforests, to cut climate change by up to 50%, and of course to save the over 100 billion innocent, defenseless animals killed by and for humans every year.”

How influential can Moby’s activism be? Share your thoughts in the comments section below!