Moby has new ‘Vegan For Life’ tattoo on his neck 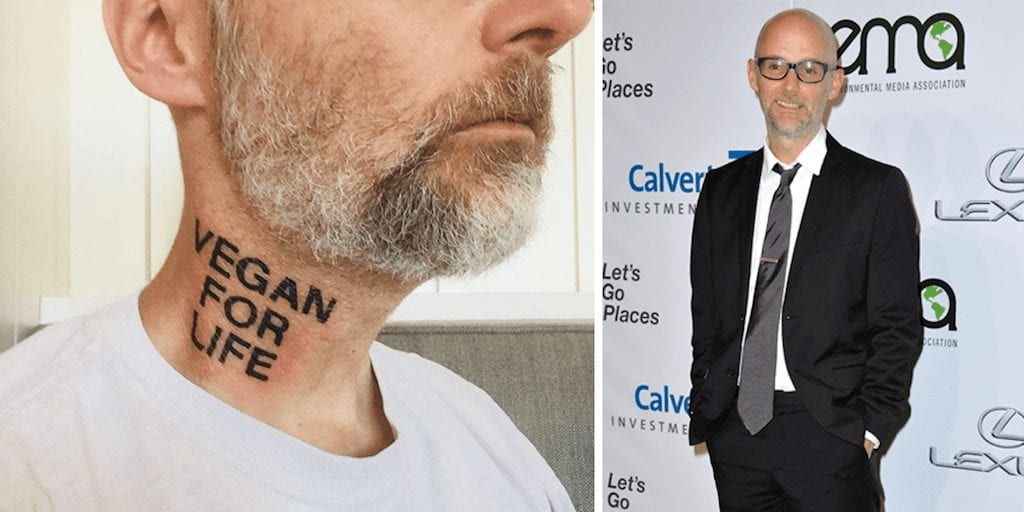 Moby has taken his vegan level to the stratosphere after having a huge ‘VEGAN FOR LIFE’ tattoo drawn on his neck.

The singer is a powerful animal rights activist, and now his compassion is there for everyone to see thanks to the bold, black slogan.

He shared a picture of the tattoo on Instagram, and wrote: “I’ve been a vegan for almost 32 years, so getting this tattoo seemed like a pretty safe bet. Also, working for animal rights and animal liberation is my life’s work. And to state the obvious, it’s a double entendre…thank you @thekatvond.”

The post was celebrated by animal lovers on social media. PETA responded: “We LOVE it! Your dedication to helping animals is far beyond the commitment to this tattoo .”

A petition was launched along with the ad, calling on McDonald’s to act.

It states: “Chickens used by McDonald’s are among the most abused animals on the planet. Bred to grow so large so fast, they often can’t walk without pain.

“Hundreds of brands—including Burger King, Starbucks, Subway, Jack in the Box, and Denny’s—have committed to banning the cruelest practices inflicted on chickens. McDonald’s has not. Let McDonald’s know that animal abuse is bad business.”

Viewers are urged to join the campaign by visiting McDonaldscruelty.com.

Last year Moby took to Instagram to urge his followers to think of the animals at Christmas.

In an Instagram story, he revealed: “All I want for Christmas is you to be one less person hurting animals.”

How much influence can Moby’s activism have? Share your thoughts in the comments section below!