Moby praises Greta Thunberg and Jane Goodall: “If these two are vegan, why isn’t everybody?” – Totally Vegan Buzz
Skip to content

Moby praises Greta Thunberg and Jane Goodall: “If these two are vegan, why isn’t everybody?” 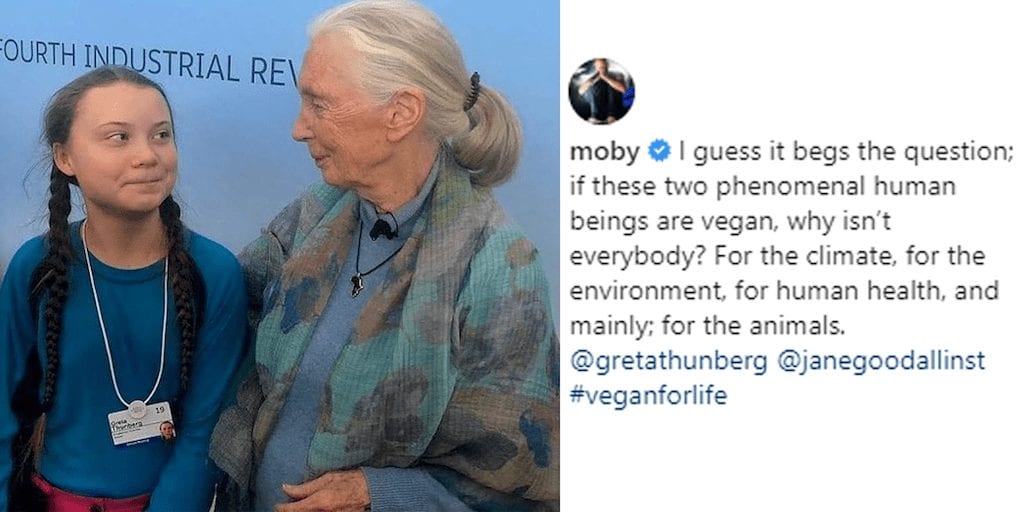 Vegan singer Moby has urged his fans to follow in the footsteps of environmentalists Jane Goodall and Greta Thunberg and adopt a vegan diet.

Moby is a passionate animal rights activists and regularly posts on social media to urge his followers to ditch animal products.

And this week he posted an image of teenage Swedish activist Greta Thunberg and conservationist Jane Goodall.

“I guess it begs the question; if these two phenomenal human beings are vegan, why isn’t everybody? For the climate, for the environment, for human health, and mainly; for the animals,” Moby wrote.

Greta has been vegan for many years, and even managed to convince her parents to ditch meat and dairy from their diets.

She’s increasingly been in the spotlight since she started striking school every Friday to protest climate change.

Her activism sparked school strikes from millions of students around the world, and Greta still promotes veganism to millions of followers on social media.

This month she posted a picture on Facebook after she met vegan sensation Esther the Wonder Pig.

“Such a pleasure to finally meet Esther the Wonder Pig and all the other animals and volunteers at the Happily Ever Esther Farm Sanctuary in Ontario!” she wrote.

She accompanied the caption with “#govegan #animalrescue”.