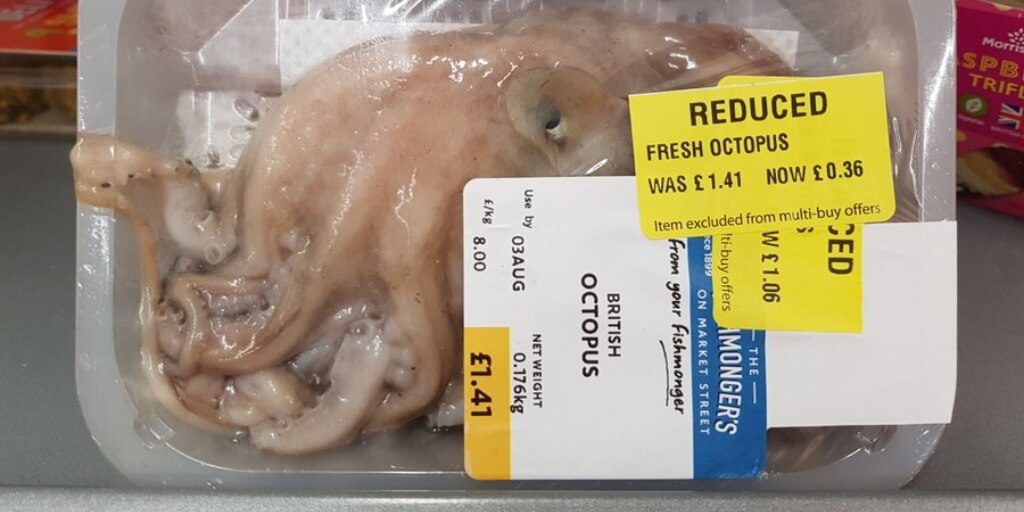 “It just shows you the low value that we put on other living beings in our world around us. I don’t think you can even buy a chocolate bar for 36p.”

Morrisons has been criticized for selling octopuses for just 36p after a charity worker posted an image of one of the creatures stacked on a special shelf for discounted food.

Justin Webb, 41, a charity worker and vegan, took the image in the reduced to clear section of a Morrisons store in Eccles, near Manchester.

Horrified and pained at the prospect of the magnificent creatures being dumped in the trashbin, he snapped the image and posted it on Twitter along with an impassioned rant as a caption.

“36 pence for a dead baby octopus, one of the most amazing creatures to ever swim the seas. I swear we do not deserve this world,” he wrote.

36 pence for a dead baby octopus, one of the most amazing creatures to ever swim the seas.

I swear we do not deserve this world. 😢 pic.twitter.com/ln0yjeQcpv

The octopus, which was mistaken to be a baby, was in fact a mature specimen from a small species.

“We should be angry,” he continued.

“The poor thing was priced at £1.41 to start with, which is offensive in the extreme for a living wild creature, to then see it marked down adds insult to injury.

“It shows the human disregard for life.

“We’ve moved her from her home to the rubbish bin. It’s unforgivable.

“These are beautiful, sentient creatures and you wouldn’t do that to dogs or cats.”

The tweet has sparked outrage as it shows what ‘little value humans put on the creatures’.

One user wrote: “Awful. They are intelligent creatures. My daughter is a marine scientist and has worked with octopi.

“They recognise faces, interact and are very clever. They should not be eaten.”

Another added: “Awful, isn’t it? They are as intelligent as cats & dogs, playful, inventive. We humans just plunder, exploit, destroy, eat what we don’t need. Sad world.”

The Conservative Animal Welfare Foundation, which is campaigning for octopuses and lobsters to be recognised as sentient creatures, and subject to the Animal Sentience Bill also condemned the supermarket.

Lorraine Platt is the charity’s co-founder. She told The Times: “It just shows you the low value that we put on other living beings in our world around us. I don’t think you can even buy a chocolate bar for 36p.

“Octopuses are highly intelligent, sentient animals that roam the seas and this image is heartbreaking. It really tugs at the heartstrings to see it shrink-wrapped. It’s pitifully sad and grim.”

According to Morrisons, stocks are managed to customer demands and prices are reduced “only occasionally and as a last resort to ensure that food that is fit for consumption is not wasted”.