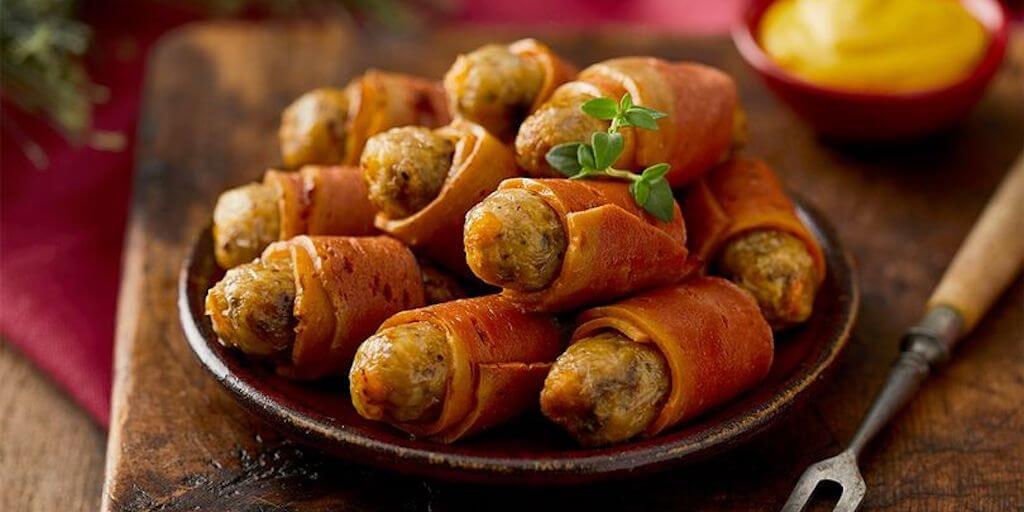 The supermarket has unveiled a whole host of vegan-friendly items in the run up to Christmas this year including starters, mains, desserts and more.

After launching limited-edition vegan Gingerbread Doughnuts for the festive season, supermarket Morrisons’ new meat-free Christmas treats have been rolled out to ensure vegans have more options to choose from.

According to Morrisons, its food makers and chefs have developed the recipes to look and taste just like the real thing after spending hours on fine tuning their flavour, juiciness and crispness.

The No-Pigs in Blankets and No-Prawn Tempura & No-Duck Spring Roll selection cost just £2.50 per pack of 10 and are stocked in the chiller aisles of the supermarket.

Other items released for the festive season include Beefless Wellington, Vegan Trifle, and a Vegan Festive Feast sandwich.

‘Listened to our customers’

Morrisons’ buying manager, Tom Coldman, said: “We’ve listened to our customers who told us they want to see more choice through the festive season and look forward to seeing these vegan twists on plates up and down the country this year.”

Leanne Walters, Morrisons’ party food expert said: “Pigs in blankets are one of the UK’s favourite Christmas treats so we have created a meat-free version that can be enjoyed by vegans or anybody else.”

While the new choices will definitely offer variety to vegans celebrating Christmas,  the ‘no pigs in blanket’ treat made with a blend of jackfruit and chickpeas for a ‘meaty texture’ has evoked a debate on social media.

One commented: “Why would you want to buy something that looks like meat?”

Another wrote: “If you don’t eat meat why would you eat something that resembles it.?”

The comments received several replies from vegetarians, vegans or those who simply choose to eat non-meat products.

One wrote: “It’s simple…..People LIKE the taste of meat BUT they do not enjoy consuming innocent animals to get that taste

“I’m pretty sure if folk had to raise, kill and prepare their meat less folk would actually eat it.”

Another said: “I loved bacon, sausages, burgers etc. Then the cruelty of getting that to the plate just got too much and I decided to go veggie.

“The fact that I can still have a burger or sausage cob without the cruelty is fab. My opinion.”

Share this story to let others know about Morrisons’ vegan Christmas range.