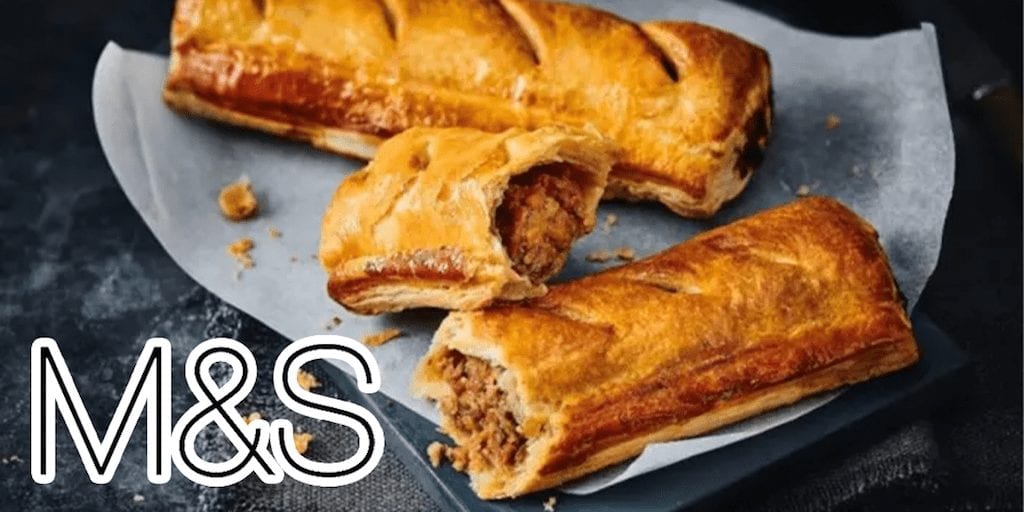 UK supermarket Marks and Spencer has increased the size of its bestselling ‘Plant Kitchen No Pork Sausage Rolls’ and is also serving it hot in nearly 50 stores across the UK.

The vegan sausage rolls could well be voted as the highest grossing vegan dish of the year as UK customers can’t seem to have enough of this savoury item.

The brand that sells about five thousand packs of its Plant Kitchen No Pork Sausage Rolls every week will sell the new version hot at £1.50 in around 50 select stores across the nation.

Have you heard? You can now get HOT vegan sausage rolls at 48 of our stores around the UK! Perfect for eating on the go or dipping in ketchup! • • • #mymarksfave #thisisnotjust #vegan #veganfood #vegantreats #vegansausageroll

The delicious ‘sausage’ rolls are made with a scrumptious soya filling with sage, thyme, mace and black pepper seasonings and wrapped up in a flaky vegan puff pastry for that crunchy, crispy feel.

“We’re rather proud of our vegan sausage roll – made with a recipe unique to M&S, it consists of 81 layers of light, flaky, dairy-free puff pastry and perfectly seasoned soy mince infused with thyme, sage, coriander and mace, so you get to enjoy the texture and flavour of a British classic without eating meat,” said M&S.

“Our no-pork sausage roll is ideal as a snack or vegan option at parties and barbecues, and can be eaten hot or cold. Try it yourself in store now.”

Apart from its Plant Kitchen range with dishes such as Cauliflower Popcorn Bites and Cashew Mac and Cheese, M&S has also unveiled an extensive vegan Christmas range including a “mouth-watering plant protein centrepiece, vegetables, roast potatoes, gravy, stuffing and even no pigs in duvets (plant protein pigs in blankets).”

The hot No Pork Sausage Rolls will be available in the following M&S stores:

What do you think of the vegan options at M&S? Share your thoughts in the comments section below!