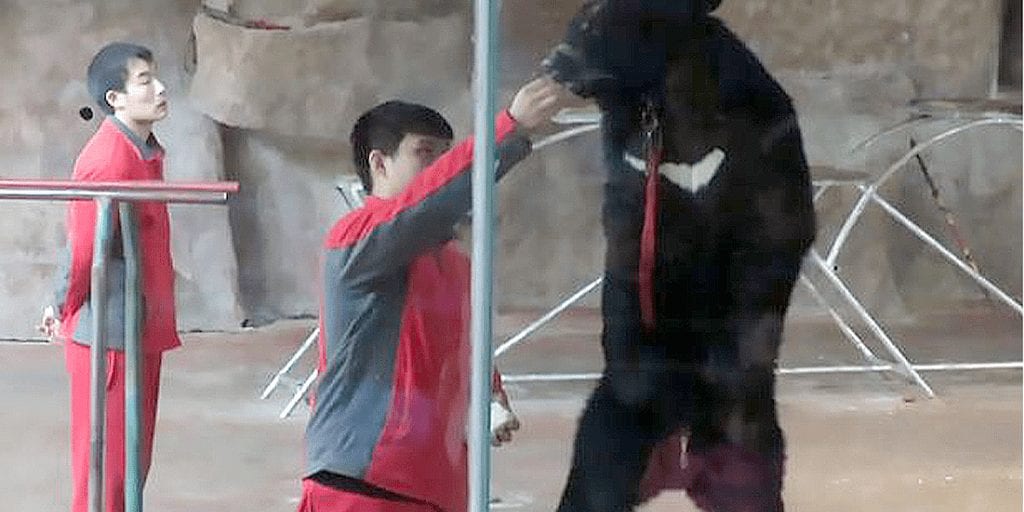 Shocking footage featuring a muzzled bear being forced to dance to music at a zoo in China has been revealed by animal rights activists.

The abhorrent performance at Bifengxia Zoo in Ya’an, Sichuan includes a section where the bear is made to dance to “That’s Not My Name” by The Ting Tings.

The visibly weak bear also is forced to stand on its hind legs and balance on a wooden board on top of a cylinder.

The tasteless performance which is led by a bear trainer who feeds the animal chunks of steamed bun.

Animal welfare group Save Animals in Performance shared the footage on social media and slammed the zoo for animal abuse.

The group said: “Half a bun for one show. This is Bifengxia Zoo’s ‘treatment’ of black bears.

“Lured by the crumbs of steamed bread, the bear performed acrobatics, rode bikes and balancing boards.

“Who can believe this zoo was honoured as the ‘natural education base for Sichuan Province’?”

After the footage was shared widely on social media, viewers reacted with disgust to the performance.

PETA Asia said in a statement: “PETA’s investigation into China’s Suzhou circuses reveals that bears are probably the most abused animals in animal performance in the country.

“Through the constant threat of violence, they are forced to hula hoop, box and play trumpets.

“Bear cubs are strung up by their necks for hours to train them to stand on their hind legs, and the animals endured numerous other forms of abuse as well.

“While bears in the wild may roam up to hundreds of miles, those in circuses are denied the opportunity to hibernate and are routinely held in dog kennel-sized cages when not performing, leading to psychological distress, arthritis, pressure sores and other debilitating health conditions.

“We urge people not to support circuses or other attractions that exploit animals.”

What do you think of the performance at Bifengxia Zoo? Share your thoughts in the comments section below!