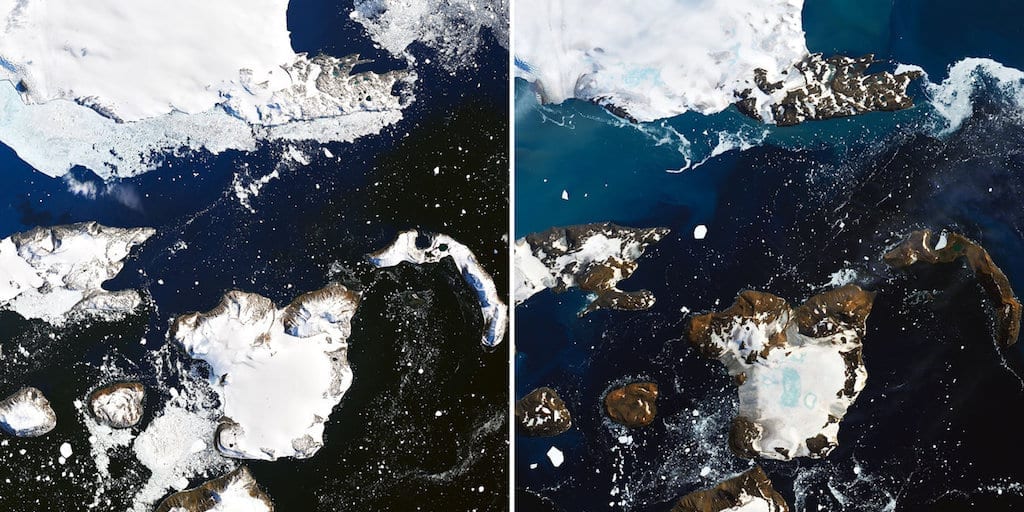 NASA has released startling images of dramatic ice melt caused by a heat wave that melted around 4 inches of snow on Antarctica’s Eagle Island.

Antarctica has experienced its third major heatwave event of the 2019-2020 Southern Hemisphere summer with both November and January also recording exceptionally warmer temperatures for the continent.

On Feb. 6, Argentina’s Esperanza Base, a research station on Antarctica’s Trinity Peninsula, noted that Antarctica’s temperature had reached 18.3°C (64.9°F), making it ‘the hottest day on record’. The weather matched the temperature of Los Angeles that day, NASA noted.

Record warmth in #Antarctica is not without consequences. In just over a week, Eagle Island and nearby areas experienced major melting https://t.co/RvETiSALcc pic.twitter.com/CDyzTfG6oK

The heatwave persisted from February 5 to 13 and NASA has released shocking images to reveal the amount of ice that has melted with the increase in temperature.

NASA’s Landsat 8 satellite has captured aerial before-and-after snapshots of Eagle Island, an ice cap at the tip of the Antarctic Peninsula about 40 kilometers (25 miles) from Esperanza Base.

The nine-day heat onslaught has resulted in pools of melted ice that span approximately a square mile.

Eagle Island has subsequently lost four inches of snow, a quarter of which melted on February 6, the day the temperature spiked to 18.3°C.

According to NASA, this one heatwave has shaved off 20 percent of the region’s entire seasonal snow accumulation in just about seven to nine days.

“I haven’t seen melt ponds develop this quickly in Antarctica,” said Mauri Pelto,  a glaciologist at Nichols College in a NASA post.

“You see these kinds of melt events in Alaska and Greenland, but not usually in Antarctica.”

The impact of human driven climate change is wrecking the ecosystem of the planet. The World Meteorological Organization (WMO) has warned that the  Antarctic Peninsula is rapidly becoming the fastest-warming regions of the planet.

According to the agency, the region has become 3 degrees hotter over the past 50 years and “some 87% of glaciers along the west coast of the Antarctic Peninsula have retreated in the last 50 years with most of these showing an accelerated retreat in the last 12 years.”

Scientists warn that such extensive ice melts will inadvertently lead to catastrophes as excess water will increase sea levels dangerously.

Alarmingly, the heat events are not likely to recede as some weather forecasts predict the region will experience warmer temperatures as high as 50 degrees in the next few weeks.

The WMO states that satellite images have also revealed that cracks in the massive Pine Island Glacier “have been growing rapidly” in the last few days.

Rising temperatures are not only melting ice but are also killing indigenous wildlife that thrive on the continent they call home. Colonies are vanishing as climate change impacts their food and habitat.

A team of scientists surveying penguin population on Elephant Island, just slightly north of the peninsula, reported that 75% of Antarctic chinstrap penguin colonies have disappeared over the past 50 years thanks to climate change.

Share this story to reveal the disastrous effects of climate change on our planet.