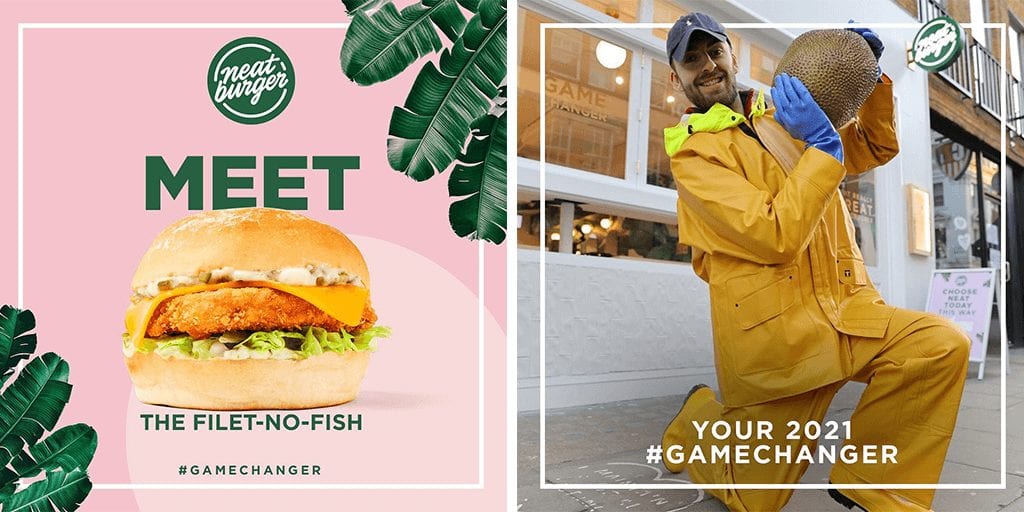 “Neat Burger thought it was about time for a change, giving consumers a tasty fish-alternative!”

The sandwich, which Neat Burger promises to rival non-vegan fish burgers in both taste and environmental credentials, is a call on Brits to switch to plant-based alternatives this Veganuary.

The patty used in the Filet-no-Fish burger is created by UK’s leading jackfruit meat-alternative producer Jack & Bry and sold exclusively at Neat Burger.

Jackfruit is regarded as the most apt alternative to fish because it has a highly adaptable, flavour-absorbing tendency and a meat-like texture.

According to Neat Burger, jackfruit is also ‘a far more sustainable alternative to fish, along with reports of overfishing currently being a worse threat to our oceans than climate change’.

The restaurant has created the burger using the patty coated in crispy breadcrumbs and layered it with vegan tartare sauce and fresh crunchy lettuce.

Neat Burger is also throwing in a slice of vegan cheese at no extra cost for the first month.

“A lot has changed since the Fillet-o-Fish launched in 1962 and formed the fish burger scene we see today – with man first landing on the moon, colour TV, creation of the internet and smartphones – but fish burgers have remained the same,” Zack Bishti, Co-Founder of Neat Burger said:

“Neat Burger thought it was about time for a change, giving consumers a tasty fish-alternative!”

Fillet No Fish: positive action for the planet and health

“Last January many restaurants struggled to keep up with the huge demand for vegan options and this year Veganuary is set to be even bigger,” Toni Vernelli, head of international communications at Veganuary, added.

“At a time when many feel helpless about the state of the world, Veganuary offers people a way to take positive action. And thanks to Neat Burger and their new Fillet No Fish, taking positive action for the planet and our health has never been tastier or easier!”

Neat Burger’s first branch launched in central London, near Oxford Circus in 2019. It now has its restaurants in Soho, and Camden, and is also available across many areas on Deliveroo.