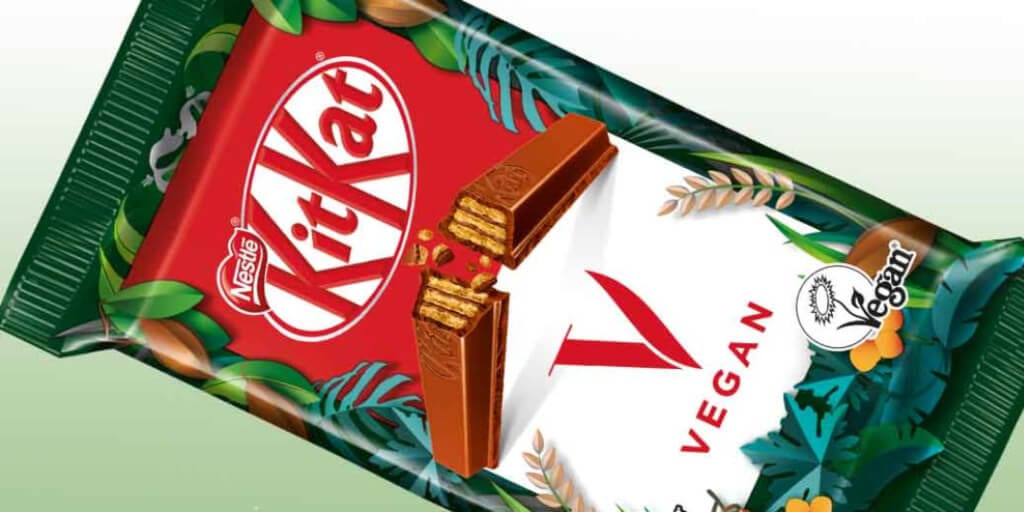 “KitKat V is a product for everyone who wants a little more plant-based in their life!”

Nestlé has confirmed the launch of a vegan KitKat chocolate bar in an announcement on Monday.

According to the brand, “the world’s most popular confectionery bars will soon have a delicious plant-based option that delivers the perfect balance between crispy wafer and smooth chocolate that people know and love.”

KitKat V has been developed by chocolate experts in Nestlé’s confectionery research and development center in York, UK.

The dairy-free bar is certified vegan, and made from 100% sustainable cocoa.

“Taste was a key factor when developing the plant-based chocolate for our new vegan KitKat,” Louise Barrett, Head of the Nestlé Confectionery Product Technology Center in York said.

“We used our expertise in ingredients, together with a test and learn approach, to create a delicious vegan alternative to our original chocolate KitKat.”

While there is no official release date, Nestlé announced the vegan chocolate will debut later this year through the KitKat Chocolatory and selected retailers, to test the opportunity for a wider roll-out.

Taking to Instagram, Nestlé released a short clip with a caption that reads: “The ‘KitKat’ is out of the bag…

“It’s almost time for plant-based fans around the world to take a break.

Nestlé Head of Confectionery, Alexander von Maillot, said:  “One of the most common requests we see on social media is for a vegan KitKat, so we’re delighted to be able to make that wish come true.

“I can’t wait for people to be able to try this amazingly tasty new KitKat. This is a product for everyone who wants a little more plant-based in their life!”

He added: “The new KitKat V means chocolate lovers now have a great plant-based option when they have a break.”

Nestle, which has previously courted controversy with a history of questionable business practices is aiming to be at the forefront of the ‘quiet food revolution that is changing how people eat’, by ‘championing the discovery of plant-based food and beverages’.

It has already launched plant-based alternatives to dairy made from rice, oat, soy, coconut, pea, and almonds across categories.

Last September it launched a vegan version of its iconic Rowntree’s fruit pastilles.