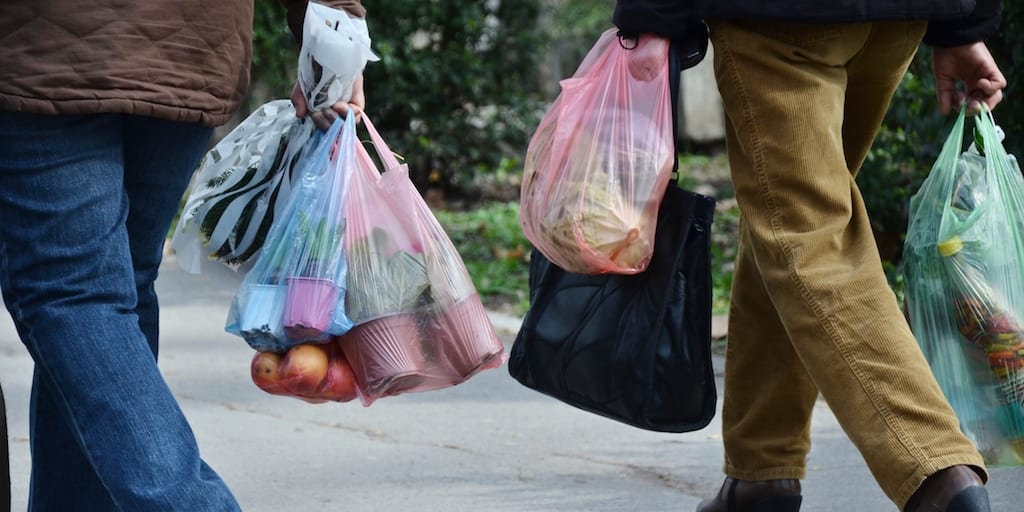 A statewide law has outlawed the use of plastic bags in New York in a bid to protect the environment.

On Sunday, New York became the third US state to implement the ban on single use plastic bags.

The ban will cut down the state’s reliance on plastic bags as New Yorkers use around 23 billion plastic bags every year, the vast majority of which end up in landfill or pollute streets and green spaces, choke waterways and harm marine life.

According to the Department of Environmental Conservation, the new law will stop all retailers such as department stores, supermarkets, neighborhood corner stores and gas stations from providing or selling plastic bags to customers.

However, officials said the law will not be enforced until April 1 to allow customers to adapt to the new rules.

In a bid to encourage customers to bring their own reusable bags, stores and businesses will charge a 5-cent fee for paper bags.

The state is also considering a ban on single use styrofoam food containers.

Ban to protect the environment

Gov. Andrew Cuomo, who passed the plastic ban last April called it a “bold action to protect our environment and ban these environmental blights”.

“Right this minute, plastic bags are hanging in trees, blowing down the streets, filling up our landfills and polluting our lakes, rivers and streams—all hurting our environment,” he said.

“Twelve million barrels of oil are used to make the plastic bags we use every year and by 2050 there will be more plastic by weight in the oceans than fish. We took bold action to protect our environment and ban these environmental blights and with this campaign we’re going to make sure New Yorkers are ready and have all the facts.”

New York mayor Bill de Blasio endorsed the ban and told New Yorkers while handing out free tote bags in Manhattan: “We only have one chance to save our planet.”

California and Oregon have already enforced a state-wide ban. Other states set to follow suit include Maine and Vermont this year and Connecticut and Delaware in 2021.

The ban, however, exempts the following commodities. Plastic is allowed for:

Exemptions will weaken the effect

Although environmental activists were happy with the announcement, they felt exemptions would weaken its effect.

According to Kate Kurera, deputy director of Environmental Advocates of New York, while the ban would cause “a tremendous reduction” in plastic waste pollution, she felt exempting food takeouts would dampen the efforts.

She also hoped the government would make the paper bag fee compulsory to force customers to bring their own bags because manufacturing paper bags is resource intensive in terms of oil, fossil fuels and trees used.

“Ideally neither bag is preferable,” she told AFP.

“Behavior is slower to change when people know they can get a free paper bag.”

Yet the ban is seen as a step in the right direction.

Mark Chambers, director of the New York city mayor’s office of sustainability, said: “The paper bag fee coupled with the bag ban encourages a deeper culture shift in New York City towards reusable habits. This is a critical shift we need to cultivate if we are to meet our zero waste goals.”

“It’s taken New York longer than you would expect, but it’s better late than never. There is broad public support for plastic bag bans and so people will shame those who flout it.”

However, the city’s plastic ban announcement on Twitter had people divided in their opinions. While some appreciated the efforts:

“Better late then never!! This should have been done a long time ago,” wrote one user.

“LA has been doing this for years. People need to put their big boy pants on and grow up. Bring your own reusable bags each time u shop. It is not that hard. Big babies,” added another.

Others were less optimistic.

“Now I just have to buy plastic bags for garbage, because I used all the bags as garbage bags. I don’t see how that impacts anything as plastic bags will still be used,” commented a user.

“It’s not being implemented correctly and its oxymoronic,” was another reply.

Plastic bags are officially banned. Together, we can create a cleaner future for our city and planet. pic.twitter.com/zUy65I0C6S

Share this story if you feel New York did the right thing by banning single use plastic bags.