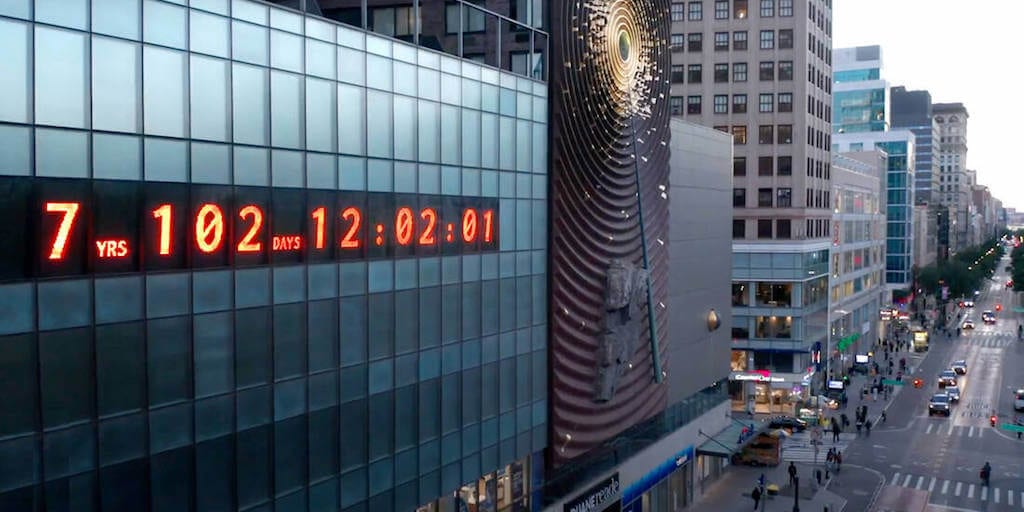 The huge countdown clock installed in Manhattan’s Union Square will now tell us exactly much time we have before climate change effects spiral beyond control.

The colossal 62-foot-wide 15-digit electronic clock has been one of the city’s most prominent and fascinating art projects with the display initially keeping time by counting the hours, minutes and seconds to and from midnight.

However, the clock has now been reprogrammed to depict a Climate Clock by artists Gan Golan and Andrew Boyd for Climate Week and will now display two numbers indicating a “deadline” and a “lifeline”.

The “deadline” figure displayed in red counts down how long it will take for the world to exhaust its carbon budget if swift measures are not implemented to keep warming under 1.5 degrees Celsius above pre-industrial levels.

The “lifeline” figure tracks the percentage of available energy being supplied from renewable sources.

The creators explain that the respective numbers are based on calculations by the Mercator Research Institute on Global Commons and Climate Change in Berlin and according to NASA, if temperatures are not kept under the threshold, the world could be ravaged by more mass heat waves, raging fires, droughts and limited water supply.

‘No time to lose’

The clock states humans have seven years and 101 days remaining before reaching that tipping point.

“We can meet this challenge, but we don’t have any time to lose.”

According to co-creator Andrew Boyd: “This is arguably the most important number in the world. And a monument is often how a society shows what’s important, what it elevates, what is at center stage.”

“This clock is not saying ‘Hey in seven years we get to wake up and start to do something,'” he added

The United States is facing a monumental challenge with the nation being engulfed by unprecedented wildfires and hurricanes- events, which scientists describe as being indicative of the ominous effects of global warming, and “the Climate Clock could serve as this constant, public reminder in the media and cultural capital of the globe of that shared deadline,” Zarillo said.

‘Fight for the planet’s future’

Stephen Ross, chairman of Related Companies, the developer that owns One Union Square South, said in a statement: “The Climate Clock will remind the world every day just how perilously close we are to the brink.

“This initiative will encourage everybody to join us in fighting for the future of our planet.”

The New York climate clock will be on display until Sept. 27, after which the installation will be moved to another location.

Share this story: New York’s giant clock counting down the time remaining for a climate meltdown