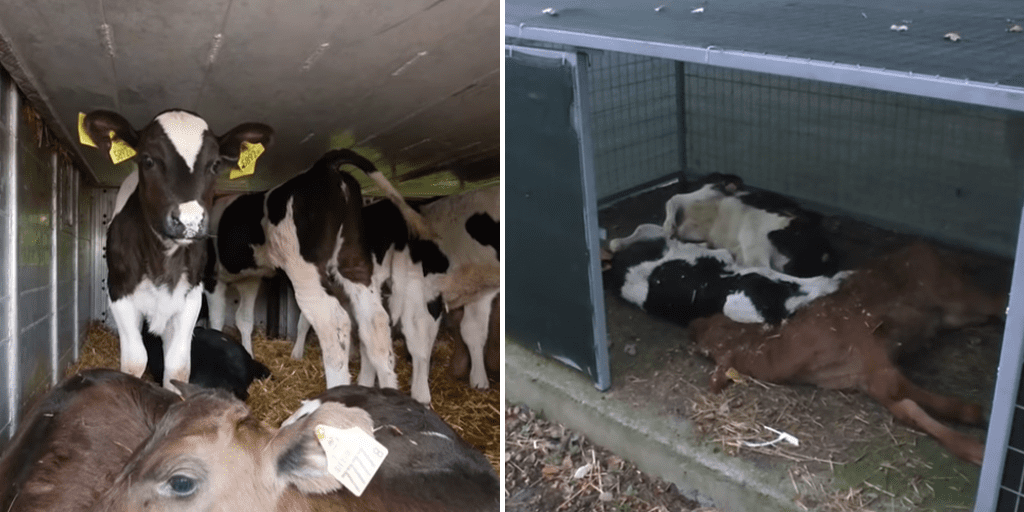 The number of unwanted newborn male cows who will be shipped from Ireland to Europe and the Middle East in horrific conditions is set to drastically increase this year.

The dairy industry in Ireland has boomed in recent years and farmers are cashing in on lucrative exports of newborn males cows.

The total number of dairy cows has increased from 1m in 2010 to 1.6m in 2020. To keep dairy cows producing milk, they must give birth every year, leaving a huge surplus of baby cows who are immediately separated from their mothers.

800,000 male calves will be born this year, with a high proportion of those born from February to April, and the beef industry in the country cannot keep up with the number of males being produced. So now dairy farmers have taken to exporting the calves as a solution.

A senior figure in Ireland’s agricultural industry has gone on record with The Guardian to explain the difficulties faced in the sector.

“The danger of having so many calves in 2020, on top of the existing pressures, means there is an emergency welfare case to be made, although no one wants to talk about it, for killing the calves on a one-off basis at three or four days old,” they said.

“We know there is going to be suffering. We know the farmers can’t manage and we need to offer a realistic solution to ease that suffering, for the calves and the farmers.”

Vets are considered too expensive for any male calves who are sick in Ireland, so the cheapest thing to do is shoot the animals – which is seen by many farmers as more humane than letting them suffer and die.

The industry has taken up the alternative solution of exporting to mainland Europe and the Middle East.

Farmers are paid for exporting their male calves – and it is an attractive option for many in comparison to the costs of caring for a calf or killing them.

Exporting has come under intense scrutiny in recent times.

Young calves typically go to European veal businesses, but the older animals end up in Turkey, Libya, Morocco, Lebanon, Russia, Tunisia, Rwanda or Kosovo for the meat and dairy industries.

Mistreatment of animals has been exposed time and time again by activists. An investigation by Compassion in world Farming revealed horrendous conditions on 27-hour journeys where calves were exposed to extreme brutality.

An investigation revealed calves being beaten, jumped on and dragged by the ears on crammed export boats on their initial transport to mainland Europe.

“The abuse was so severe, calves were collapsing in pain, dragging their hind legs along the floor unable to get back up, whilst one employee threw a calf to the concrete floor and jumped on his fragile body with full force whilst the other employees watched,” activist group Eyes on Animals reported.

The investigation ran between 14-17 March 2019 and involved trailing 23 Irish livestock trucks to inspect conditions the animals were exposed to.

According to investigators, the drinking facilities onboard the trucks were not working or inappropriate for the calves to use. As a result, many calves were unable to drink water during the long journey, including the 18 hour sea journey.

Share this article to reveal the brutal truth behind the dairy industry.