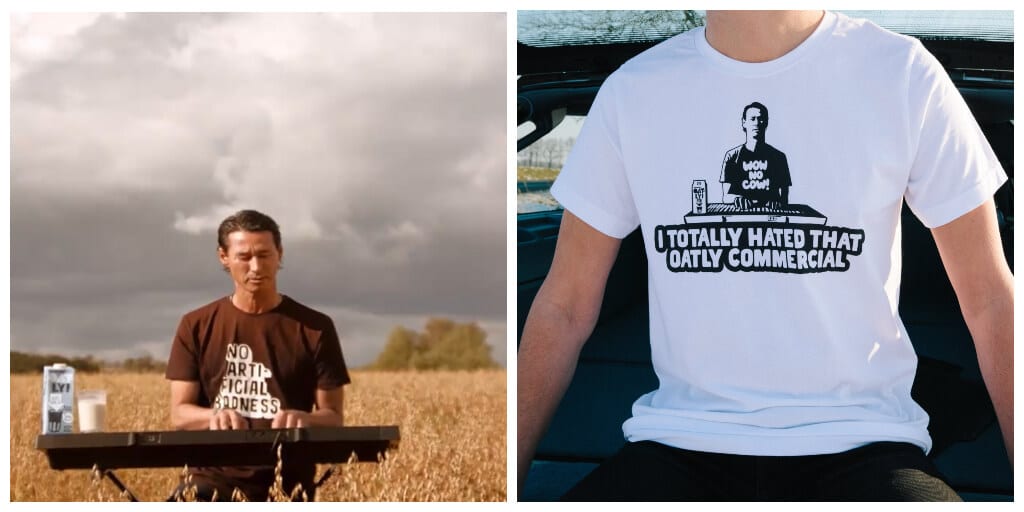 “We believe that having different opinions is what moves society forward,” Oatly states in response to the comments it has received for its first-ever Super Bowl commercial.

Oatly’s debut commercial at this year’s Super Bowl is creating ripples after it was branded the ‘stupidest’ ad ever aired during the American football game.

Ironically, the 30-second ad, which cost a ‘fraction of what the catering budget is for almost every other spot in the Super Bowl’, is actually a recycled ad that Oatly first ran in Sweden in 2014, and was promptly banned following a lawsuit from the Swedish dairy lobby.

The inane commercial, which was aired during the football game’s second quarter, features Oatly’s CEO Toni Petersson singing a jingle while playing piano in a field, with a glass of oat milk sitting atop his keyboard.

The lyrics of the song are: “It’s like milk but made for humans.

The CEO is wearing a T-shirt with the words, “No artificial badness,” written on it.

The ad has reportedly cost Oatly around $US5.5 million ($A7.1 million) for a spot at this year’s Super Bowl.

“You can look at it and say ‘that might be the stupidest use of ad space on the Super Bowl ever. The best approach is just to put something out there that feels real and then let them make their judgment.”

Since its debut, the commercial has become a hot topic of debate with people on both sides of the fence.

“The Oatly commercial is the first one I’ve seen that could have been a Zoom call,” read one comment on Twitter.

“Well I used to drink @oatly, but time to switch brands,” another commented.

However, others congratulated Oatly on its ingenuity.

“This was amazing!!! we just rewound to watch it again !!! Congrats on the best commercial ever. Cheers to the team!!,” wrote one Instagram user.

“I loved the commercial!! Appreciate the low fi, straight forward jingle, especially from my favorite nondairy drink,” commented another.

The Swedish brand was expecting a strong reaction since it writes on its website: “Yeah, that was really our CEO singing on the Super Bowl.

“Maybe interrupting the second quarter so the world could experience Toni’s musical stylings about how oatmilk is like milk but made for humans wasn’t the most Super Bowl-ish idea ever, but on the other hand, our attempt to promote Toni’s singing skills to a wider audience actually got you to visit an oatmilk company website on the big day. Total success!”

Oatly is also making sure, the message lingers. Shortly after the commercial was aired, it launched a t-shirt that reads “I Totally Hated That Oatly Commercial” on its website.

On Instagram, the brand writes: “Hey US! Were you just watching the big game when out of nowhere our CEO Toni appeared in an oat field and provided you with his very own synth-accompanied musical stylings about Oatly?

“If so, we can’t give you back those 30 seconds but we can give you this free t-shirt that will let the world know where you stand on our attempt to promote Toni’s singing skills to a wider audience, which you can wear proudly knowing we will not be offended in any way.

“We believe that having different opinions is what moves society forward and besides, walking around with our CEO plastered across your chest might spark some deep conversations about the benefits of a drink made directly from oats that skipped the cow altogether, or how switching from dairy to oatmilk can save the planet a ridiculous amount of CO2e, so yeah, we are cool with it.”

The limited-edition free t-shirt is currently out of stock after selling out within 5 minutes.