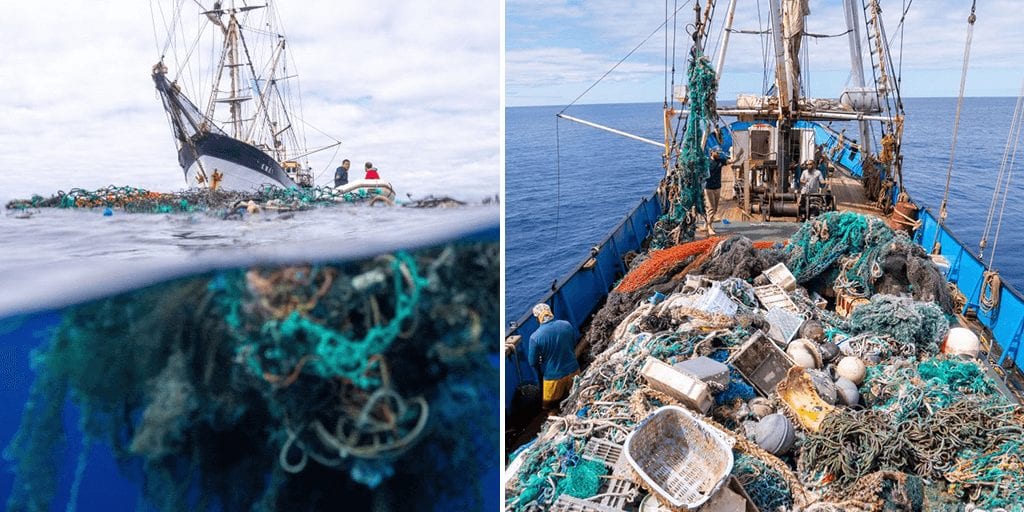 Around 103 tons (206,000 pounds) of fishing nets and plastics trash was removed from the Great Pacific Garbage Patch located between the coasts of California and Hawaii in one of the biggest ocean clean-up drives ever.

The conservation group’s latest haul is more than double their previous record last summer, which culled 42 tons of plastic waste after 25 days out at sea.

“I am so proud of our hard working crew,” said “Ghost Net Buster” Mary Crowley the founder and executive director of OVI.

“We exceeded our goal of capturing 100 tons of toxic consumer plastics and derelict ‘ghost’ nets, and in these challenging times, we are continuing to help restore the health of our ocean, which influences our own health and the health of the planet.”

The Great Pacific Garbage Patch- one of the most remote regions of the Pacific Ocean is roughly 1.6 million square kilometers or more than double the size of Texas. It is estimated that the patch harbours around 80,000 tonnes of plastic trash, most of which comes from commercial fishing and maritime operations.

The non-biodegradable debris not only impairs the ocean’s ability to store carbon- a major factor associated with controlling the deleterious effects of climate change, it also poses a threat to marine life including sea turtles, whales, dolphins, and even reefs.

“The oceans can’t wait for these nets and debris to break down into microplastics which impair the ocean’s ability to store carbon and toxify the fragile ocean food web,” added Crowley.

While the group’s cleaning efforts are of immense importance, the rate at which the ocean is getting polluted each year is alarmingly high. Research states up to 12.7 million tonnes of plastics enter the planet’s oceans each year, which equals to a total of 150 million tons that currently pollute our marine environments.

However, Crowley is optimistic that her team’s efforts are making a difference.

“There is no doubt in my mind that our work is making the oceans healthier for the planet and safer for marine wildlife, as these nets will never again entangle or harm a whale, dolphin, turtle or reefs,” she said.

To continue their clean-up expeditions, Ocean Voyages Institute launched a second 30 day voyage, which departed in the last week of June, and has plans to expand the operation even further by next year.

The 2nd leg of our record breaking 2020 cleanup expedition is about 2 week in and collecting tons of consumer plastics and ghostnets from the ocean. It is through donations from individuals that our vital work is possible. Please support us: https://t.co/RQbX8NhHQ4 pic.twitter.com/vqK16nlpv2

“Our goal is to have another 3-4 boats working next year—all bringing in large cargos of debris,” Crowley told GNN over the phone.

“We have vessels wanting to help clean up, so right now we can begin to make a big change, because our solutions are scalable.”

You can donate here to help OVI galvanize its ocean clean-up efforts.

Share this story to let others know of OVI’s efforts in cleaning the marine environment.