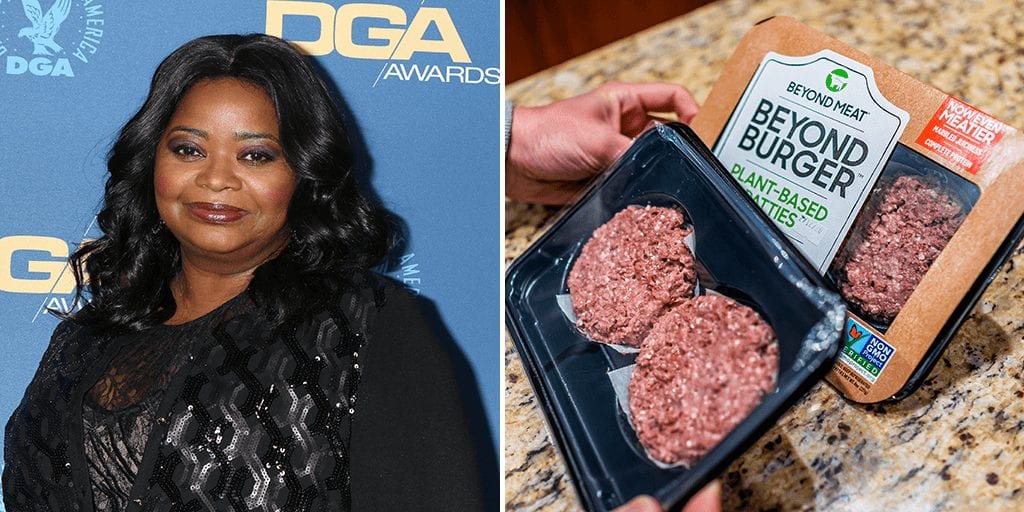 ‘We have a vision of a future where we can continue to eat what we love through the creation of delicious, nutritious options without the use of GMOs or synthetic ingredients.’

Beyond Meat has launched its first-ever TV commercial starring Octavia Spencer along with a cameo by NFL star Todd Gurley.

The ad debuted during the Lakers vs. Jazz NBA game on Spectrum Sportsnet. It will be aired next during the Brooklyn Nets vs. Milwaukee Bucks game on the YES Network and will also run nationally on select ViacomCBS channels and on connected TV platforms.

In the commercial, award-winning actress, and producer Octavia Spencer, who also became a Beyond Meat brand ambassador this year is heard asking simple “What if?” questions while urging views to go beyond their normal diets and consider a future of food that’s better for people, animals and the planet.

Some of the questions, Spencers asks are: “What if we took this cow off the table, and just made friends with her?” “What if this guy grew more plants and we got protein from his beans, broan rice and peas instead and made a good burger?” before ending with the lines “What if just taking the animal out of the meat made us and our planet healthier? What if we all Go Beyond?”

The commercial also includes shots of athletes who have embraced a plant-based diet.

According to Fast Company, Octavia Spencer initially got interested in Beyond Meat while trying to eat healthier, and plant-based products have now become a part of her diet.

“I’m really proud to be a part of this movement and love that Beyond Meat is inviting us all to imagine a brighter future with the simple question: ‘What If We All Go Beyond?’” the Alabama actress said.

“I see the power of collective change happening all around us, and the future of our food is no different. My health is the reason that I’ve started eating more plant-based meat, and Beyond Meat’s products taste so good, it made the transition a welcomed change. I can’t wait to share the experience I’ve had with more people and invite them to try going beyond, too.”

“We are launching this movement to invite everyone to join us in a journey of creating the future of food. We want to show people how small actions collectively can make a big impact,” said Beyond Meat’s chief marketing officer Stuart Kronauge

“We have a vision of a future where we can continue to eat what we love through the creation of delicious, nutritious options without the use of GMOs or synthetic ingredients.”

Meanwhile, Beyond Meat has been rapidly expanding its global presence. Its meat substitutes are already served in several restaurant chains such as Dunkin’ Donuts, Pizza Hut, McDonald’s and Subway. This month, the company also launched a limited trial of plant-based chicken nuggets for KFC in California.

The plant-based food startup has also started supplying BJ’s Wholesale and Sam’s Club after launching in Costco last year. The club stores will also stock the meatless alternative in eight packs of its Beyond Burger flagship product.

“Having entered all national conventional retailers in the U.S., we looked for where the white space existed and club stores were the next logical step towards increasing accessibility to plant-based meat among mainstream consumers,” said Beyond Meat’s chief growth officer Chuck Muth.

“By offering the Beyond Burger in a larger format, we’re able to provide value to consumers and a more accessible entry point for those looking to try a plant-based option for the first time or increase their adoption of plant-based meat.

“With the added focus on retail the past few months as well as a shift towards less frequent, stock-up style shopping trips, our distribution in club stores has been especially critical.”